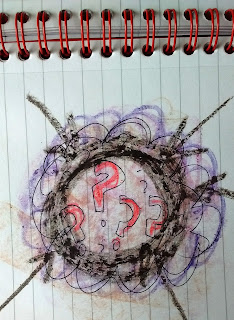 So, last year I blogged about an approach I take to managing uncertainty: Put a Ring on It.

The post was inspired by a conversation I’d had with several colleagues in a short space of time, where I’d described my mental model of a band I put around all the bits of the problem I can’t deal with now, leaving behind the bits that are tractable.

After doing that, I can proceed, right now, on whatever is left. I’ve encircled the uncertainty with a dependency on some outside factor, and I don’t need to think about the parts inside it until the dependency is resolved. (Or the context changes.)

And this week I was treated to a beautifully simple implementation of it, from one of those colleagues. In a situation in which many things might need doing – but the number and nature is unknown – she controlled the uncertainty with a to-do list and a micro-algorithm:

Uncertainty encountered. And ringed with a list. And mental energy conserved. And progress consistently made.