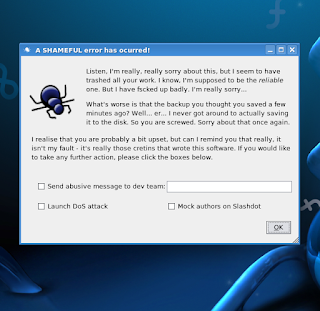 I’ve written before about the links I see between joking and testing – about the setting up of assumptions, the reframing, and the violated expectations, amongst other things. I like to listen to the The Comedian’s Comedian podcast because it encourages comics to talk about their craft, and I sometimes find ideas that cross over, or just provoke a thought in me. Here’s a few quotes that popped out of the recent Elis James episode.

On testing in the moment:

On the value of multiple perspectives, experiences, skills:

I’ve even tried sitting in the house and bantering with myself like I’m in a pub because I hate the myth that standups are all these weird auteurs and we should do everything on our own.

The thing with being bilingual is that I have a different personality in Welsh and English. My onstage persona is different.

On the gestalt possibilities of collaboration:

I love collaborating … being in a room with another comic … that’s the funnest part of comedy, bouncing off each other and developing an idea together.

The difference between thinking of an idea on your own and wondering if it’s funny, and then immediately asking the person next to you, who’s a trusted friend whose opinion you respect, and then they say “yeah!” and say one little tweak and it sends you off down a completely different path.

The king of this is Henry Packer. If you take anything to him he will give you an angle that is from such a bizarre place and suddenly it will be a great routine.

I will occasionally write out a routine longhand and I’ll put all the words into a thesaurus. The thing with a thesaurus – it’s an extraordinary tool – is that the reason that ‘seldom’ and ‘doggerel’ are funny is that you know what they mean but you’d never use them. They’re not quite on the tip of your tongue, they’re sort of half-way back.