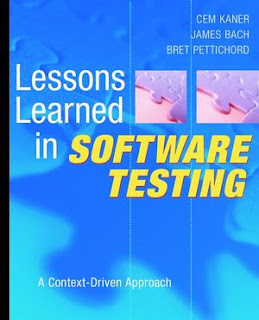 I’m enjoying the way the Test team book club at Linguamatics has been using our reading material as a jumping-off point for discussion about our experiences, about testing theory, and about other writing. This week’s book was a classic, Lessons Learned in Software Testing, and we set ourselves the goal of each finding three lessons from the book that we found interesting for some reason, and making up one lesson of our own to share.

Although Lessons Learned was the first book I bought when I became a tester, in recent times I have been more consciously influenced by Jerry Weinberg. So I was interested to see how my opinions compare to the hard-won suggestions of Kaner, Bach and Petttichord.

For this exercise I chose to focus on Chapter 9, Managing the Testing Group. There are 35 lessons here and, to the extent that it’s possible to say with accuracy given the multifaceted recommendations in many of them, I reckon there’s probably only a handful that I don’t practice to some extent.

One example: When recruiting, ask for work samples (Lesson 243). This advice is not about materials produced during the  interview process. It is specifically about bug reports, code, white papers and so on from previous employments or open source projects. I can’t think of an occasion when I’ve asked for that kind of thing from a tester.

Of the 30 or so lessons that I do recognise in my practices, here’s three that speak to me particularly today: Help new testers succeed (Lesson 220), Evaluate your staff as executives (Lesson 213), The morale of your staff is an important asset (Lesson 226).

Why these? Well, on another day it might be three others – that’s what I’ve found with this book over the years – but in the last 12 months or so our team has grown by 50% and we’ve introduced line management structure. This triplet speak to each of those changes and the team as a whole, as we work through them.

When bringing new people into our team we have evolved an induction process which has them pair with everyone else on the team at least a couple of times, provides a nominated “first point of contact”, a checklist of stuff to cover in each of the first days, weeks and months, a bunch of introductions to the Test team and company (from within the team) and to other parts of the company (from friendly folk in other groups). We also have the new person present to the team informally about themselves and their testing, to help us to get to know them, develop some empathy for them, to give them some confidence about talking in front of the established staff. Part of the induction process is to provide feedback on the induction process (this is not Fight Club!) which we use to tune the next round.

Until this year, I have conducted all annual reviews for all of the testers in my team. This affords me the luxury of not having to have externalised the way in which I do it. That’s not to say that I haven’t thought about it (I have, believe me, a lot) or that I haven’t evolved (again, I have) but more that I haven’t felt the need to formally document it. Now that there are other line managers in the team I have begun that process by trying to write it down (almost always a valuable exercise for me) and explaining it verbally (likewise; particularly when doing it to a bunch of intelligent, questioning testers).

How to assess the performance and development needs of your team (fairly) is tricky. The notion of executive in Lesson 213 is from Drucker – “someone who manages the value of her own time and affects the ability of the organisation to perform” as Lesson 211 puts it – and essentially cautions against simple metrics for performance in favour of a wide spread of assessments, at least some of which are qualitative, that happen regularly and frequently. It recommends paying attention to your staff, but contrasts this with micromanagement.

Past experience tells me that there is almost never consensus on a course of action within my teams and I rarely get complete agreement on the value of an outcome either. However, it’s important to me to be as inclusive and open and transparent as possible about what I’m doing, in part because that’s my philosophical standpoint but also because I think that it contributes to team morale, and that is crucial to me (Lesson 226) because I think a happy team is in a position to do their best work.

When planning and going through the kind of growth and restructuring that our team has in the last 12 months, morale was one of my major concerns – of the new hires, of the existing team members, and also of myself. It’s my intuition that important aspects of building and maintaining morale in this kind of situation include providing access to information, opportunity to contribute, and understanding of the motivation.

I didn’t want anyone to feel that changes were just dropped on them, that they weren’t aware that changes were coming, that they had no agency, that they hadn’t had chance to ask questions or express their preferences or suggestions, and that I hadn’t tried to explain what options were being considered and why I made the particular changes that I did, and what my concerns about it are, and that my full support is available to anyone who wants or needs it.

The lesson of my own that I chose to present is one I’ve come back to numerous times over the years:

If you can, listen first.

Listening here is really a proxy for the intake of information through any channel, although listening itself is a particularly important skill in person-to-person interactions. Noticing the non-verbal cues that come along with those conversations is also important, and likewise remembering that the words as said are not necessarily the words as meant.

Since reading What Did You Say? I have become much more circumspect about offering feedback. Feedback is certainly part of the management role – any manager who is not willing to give it when requested is likely not supporting their staff to the fullest extent they could – but feeling that it’s the manager’s role to dispense feedback at (their own) will is something I’ve come to reject.

These days I try to practice congruent management and a substantial part of that is that it requires understanding – of the other person, the context and yourself. Getting data on the first two is important to aid understanding, and listening – really listening, not just not speaking – is a great data-gathering tactic. The Mom Test, which I read recently, makes essentially the same point over and over and over. And over.

Listening isn’t always pleasant – I think, for example, of a 30-minute enumeration of things a colleague felt I hadn’t done well – but I try to remember that the other person – if being honest – is expressing a legitimate perspective – theirs – and understanding it and where it comes from – for them – is likely to help me to understand the true meaning of the communication and help me to deal with it appropriately.

And that’s a lesson in itself: managing is substantially about doing your best to deal with things appropriately.
Image: Wiley