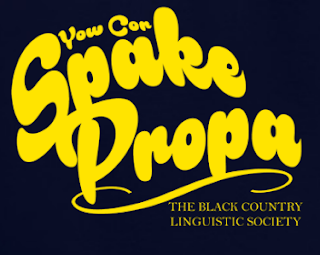 I’ve been thinking about public speaking and me.

Wind back a year or so. Early in November 2015 I presented my talk, my maiden conference talk, the first conference talk I’d had accepted, in fact the only conference talk I had ever submitted, on a massive stage, in a huge auditorium, to an audience of expectant software testers who had paid large amounts of money to be there, and chosen my talk over three others on parallel tracks. That was EuroSTAR in Maastricht. I was mainlining cough medicine and menthol sweets for the heavy cold I’d developed and I was losing my voice. The thing lasted 45 minutes and when I was finished I felt like I was flying.

Wind back another year or so. At the end of July 2014 I said a few words and gave a leaving present to one of my colleagues in front of a few members of staff in the small kitchen at work. I was healthy and the only drug I could possibly be under the influence of was tea (although I do like it strong). The thing lasted probably two minutes and when I was finished I felt like I’d been flushed out of an aeroplane toilet at high altitude.

Wind forward to today, January 2017. In the last couple of years, in addition to EuroSTAR, I have spoken a few times at Team Eating, the Linguamatics brown bag lunch meeting, spoken to a crowded kitchen for another leaving presentation, spoken to the whole company on behalf of a colleague, spoken at several Cambridge tester meetups, spoken at all three of the Cambridge Exploratory Workshops on Testing, spoken at the Midlands Exploratory Workshop on Testing, spoken at the UK Test Management Forum, and spoken at a handful of local companies, and opened the conference (yes, really) at the most unusual wedding I’ve ever been to.

Now back to 2014 and that kitchen. I stood stiffly, statically, squarely front of the fridge. Someone tapped the glass for quiet and as I spoke my scrap of paper wobbled, and my voice trembled, and my knees knocked. 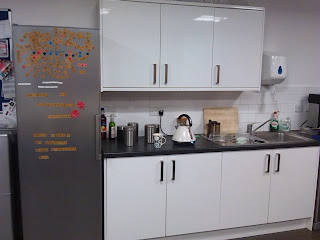 I found that the EuroSTAR call for papers was open, and I wrote my proposal, and got some comments on it from testers I respect, and I rewrote my proposal, and I sent it off, and I crossed my fingers without being quite sure whether I was hoping to be accepted or not. Then, if I’m honest, I made very little progress for a couple of months, until I came across Speak Easy.

Speak Easy team inexperienced speakers with experienced mentors to help with any aspect of conference presentations. It sounded relevant so I signed up and, within a few days, James Lyndsay got in touch. In our first exchange, this is what I told him I wanted:

Amongst other things, he asked me questions such as what did I mean by nerves? When did I get them? And what was I currently using to moderate them?

Amongst other things, he gave me a suggestion: “having confidence in your material can help, but not as much as knowing the stuff”.

Amongst other things, he assigned me a task: visualising a variety of scenarios in which I was required to speak in front of different audiences (people I knew, experts in my field, experts in an unfamiliar field, …) from different positions (presenter, audience member, …).

Amongst other things he had me watch several talks, concentrating on the breathing patterns of the speakers rather than their words.

Based on my responses, he proposed further introspection or experimentation. In effect, he explored my perception of and reaction to my problem with a range of different tools, looking for something that might provide us with an “in”. In retrospect, I think I could have done more of this myself. But, again in retrospect, I think I was too close to it, too bound up in the symptoms to be able to see that.

Amongst other things, and a little out of the blue, for both of us, he mentioned that I might look into Toastmasters on the basis of Tobias Mayer’s blog post, Sacred Space, published just a few days previously. So I did. In fact, I went to the next meeting of Cambridge City Communicators, which was the following week, and I stood up to speak.

I reported back to James afterwards: I was thrown an “agony aunt” question and had to answer it there and then, with no prep time. I was nervous, I was pleased that I didn’t gabble, I deliberately paused, and my voice didn’t (I don’t think) shake.  They told me that I was very static (they are hot on body language and gesture) and I ummed a little. But my personal feedback is that although I was able to some extent to overcome the shakes and the thumping chest, I wasn’t my natural self.  I was concentrating so much on the medium that the message was very average. So I think I want to tune my goal in Speak Easy: I want to feel like myself when speaking in front of a group.

I can’t emphasise how big a deal this last point was for me. It changed what I wanted to change. I realised that I could live with being nervous if it was me that was nervous and not someone else temporarily inhabiting my body.

And that was just as well, because during this period I got an email from EuroSTAR. I’d been accepted. Joy! Fear!

So I signed up to Toastmasters and committed myself to stand up and speak at every meeting I attended, and to do so without notes from the very beginning, and to do it wholeheartedly. I learned a few things: 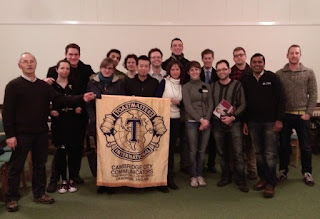 I attended Toastmasters religiously every two weeks and kept up my goal of speaking at every meeting in some capacity. The possibilities include scheduled talks, ad hoc “table topics” where people volunteer to speak on a subject that’s given to them there and then, and various functional roles. Whatever I was doing, I’d look for a way to prepare something for it, or dive into the unexpected with full enthusiasm.

I frequently didn’t enjoy either my performance or my assessment of my performance, but I found that I could see incremental improvement over time. I used James as a sounding board, reporting back to him every now and again about problems I’d had or victories that I felt I’d won, or about the positive things that attending Toastmasters was giving me:

Talking of feedback, a summary of the advice I was given in the eight or nine months I was there might be: speak clearly, don’t be afraid to pause, include variety in my voice, use my hands to emphasise and illustrate points, use some basic structural and rhetorical devices, stop rocking backwards and forwards and shuffling my feet, stop touching my nose

Other than the last couple, which are habits I had no idea I had, this is standard advice for beginner speakers. What’s useful, I found, is to get it applied to you regularly about some speaking you’ve just been doing, rather than reading it in a blog post when you haven’t been anywhere near presenting for months.

But enough of that, because suddenly it was the start of November and I was in a taxi, in a plane, in a taxi, on a train, in a taxi, in front of a stage at a conference centre in Maastricht waiting to deliver my talk.

And then I was on the stage. And I had a headset mic on – which I had never done before.  And I was coughing, and the sound tech was coughing. And we shared my cough sweets. And I was being introduced. And I was stepping forward from the side and … and … and … amazingly I found that I was smiling.

And I was interacting with the audience. And I was making a joke. And they were laughing. And I wasn’t shaking. And my voice wasn’t catching. And I was delivering my talk in what felt like a natural way, with pauses, at a natural pace … and although I can’t be sure what I was doing with my feet, I can say that my head was very, very big. 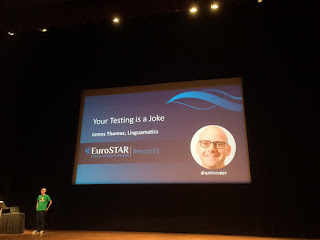 A few weeks later, I got an email from the organisers:

Thank you for contributing to the success of EuroSTAR Conference 2015, we hope you enjoyed the experience of speaking in Maastricht. We have amalgamated all the information from attending delegates and for your feedback scores and comments on your session are included below:

Individual speakers were evaluated by delegates using a 1-10 basis (10 being excellent – 1 being poor).

We categorize sessions by the following standards:

Your score was  5.90 out of 67 respondents which according to above table, came in the Below Minimum bracket. The track session presentation overall average score (40 track sessions) was 7.51

Comments on Forms below:-

And I’d got similar comments directly too. I’d known that including jokes themselves (in a talk called Your Testing is a Joke, about the links between testing and joking) was a risk to non-native speaker comprehension from my practice runs, and I’d changed the talk to reduce it. It’s also indisputable that I have an accent (I’m from the Black Country and it shows) and I think that having a heavy cold probably contributed to any lack of clarity.

So it wasn’t great getting this kind of feedback – duh! – but knowing what I wanted prevented me from being discouraged: on that stage on that day, however it came across to anyone else, I was myself.

Thankfully, usefully, I did also get some positive feedback from attendees at the conference and the content of my talk was validated by winning the Best Paper prize. But even without those things I think I’d have been able to take significant positives in spite of the audience reviews.

Back at work, I quickly had an opportunity to exorcise a demon by doing another leaving presentation. I treated it as I would a Toastmasters talk and wrote a draft in full, which I then repeated until I’d smoothed it out sufficiently. And then in the kitchen I wasn’t rubber-legging and I wasn’t heart-pounding and I wasn’t knee-knocking, and I tapped the glass and I spoke without notes and I got a laugh and I ad-libbed. And, sure, I stumbled a bit, but I was still there and doing it and doing it well. Or, at least, well enough.

I’ve been thinking about public speaking and me.

I wouldn’t want to claim anything too grand. I haven’t cracked the art of presenting. I still get nerves. I am not suggesting that you must do the same things as I did. I am not claiming that I haven’t had some setbacks, and I don’t have a magic wand to wave. But if I tried to summarise what I’ve done, I guess I’d say something like this:

And I made my change happen.