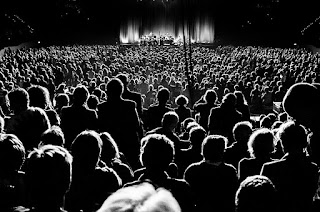 Thinking about what I might present I remembered that Jerry Weinberg, in Perfect Software, says “The number one testing tool is not the computer, but the human brain — the brain in conjunction with eyes, ears, and other sense organs. No amount of computing power can compensate for brainless testing…”

And he’s got a point. I mean, I’d find it hard to argue that any other tool would be useful without a brain to guide its operation, to understand the results it generates, and to interpret them in context.

In show-and-tell terms, the brain scores highly on “tell” and not so much on “show”, at least without a trepanning drill. But, in any case, I was prepared to take it as a prerequisite for testing so I thought on, assuming I could count on my brain being there, and came up with this:

The thing I can’t do without when testing is people.

Why? Well, first and foremost, software is commissioned by people, and built by people, and functions to service the needs of people. Without those people there wouldn’t be software for me to test. As a software tester I need software and software needs people. And so, by a transitive relationship, I need people.

Which is a nice line, but a bit trite. So I thought some more.

What do people give me when I’m testing? Depending on their position with respect to the software under test they might provide

There are methodologies and practices that recognise the value of people to other people. For example, XP, swarming, mobbing, pairing, 3 Amigos, code reviews, peer reviews, brainstorming, … and then there are those approaches that provide proxies for other people such as personas, thinking hats, role playing, …

Interactions with others needn’t be direct: requirements, user stories, books, blogs, tweets, podcasts, videos, magazines, online forums, and newsletters, say, are all interactions. And they can be more or less formal, and facilitated,  like Slack channels, conferences, workshops, and even meetups. They’re generally organised by people, and the content created by people for other people, and the currency they deal in is information. And it’s information which is grist to the testing mill.

And that’s an interesting point because, although I do pair test sometimes, for the majority of my hands-on testing I have tended to work alone. Despite this, the involvement of other people in that testing is significant, through the information they contribute.

Famously, to Weinberg and Bolton, people are crucial in both a definition of quality and indeed a significant proportion of everything else too.

Fair enough, you might ask with a twinkle in your eye, but didn’t Sartre say “Hell is other people“?

Yes he did, I might reply, and I’ve worked with enough other people now to know that there’s more than a grain of truth in that. (Twinkling back atcha!) But in our world, for our needs, I think it’s better to think of it this way: software is other people.
Image: https://flic.kr/p/gp2CDC

Edit: I’ve listed some of the other things that were suggested at the meetup in Without Which.