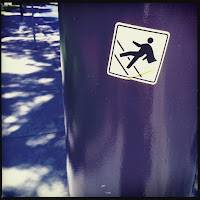 When Karo asked whether it’d be OK if she nominated me along with Chris George and Neil Younger as meetup heroes for a UKSTAR competition I said I was sure we’d all be flattered.

Know any Software Meetup Heroes? I nominated @chrisg0911 @norry_twitting @qahiccupps – with a heartfelt thanks! https://t.co/6q68WU4fW1


I guess I didn’t really expect it to go anywhere and I certainly didn’t expect that I’d feel somewhat embarrassed if it did. 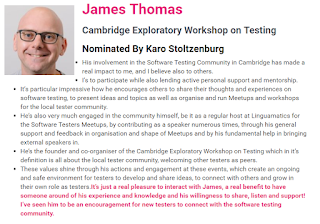 And so there you go, I learned something about myself. Again.

I’ve read the short-listed nominations and Emma, Oana, Alexandru, Leigh, Tony, and Hugh all look like great candidates doing great work for their local testing communities. I’d love you to go and read about them and vote for a hero right now.

Except that as I write this, it looks like, with delightful irony, that might not be possible …

@qahiccupps there a bug in voting format?Ppl i know couldn’t vote even once

Which I suppose means that you have a little spare time in which I can urge you to get involved if you aren’t already!

If you’re reading this and you’re from Cambridge, join the local tester meetup group run by Karo and Chris and come along to the morning Lean Coffee or the evening sessions. You can read my notes from recent meetings to get a flavour of what they’re about.

If you attend just one of the Cambridge meetups in the 6 months before we announce a CEWT – Cambridge Exploratory Workshop on Testing – you’ll automatically get an invite to that too.

If you’re not from these parts I encourage you to find your own local meetup, with its own heroes, and get in there. You could do a lot worse than starting at the Ministry of Testing meetup group.

And if there’s nothing happening locally for you why not set something up? Here’s some peer workshop wisdom that proved enormously helpful to me when I was getting CEWT off the ground.
Image: https://flic.kr/p/c4aHWC