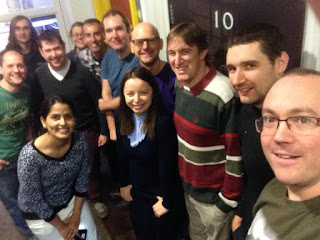 CEWT is the Cambridge Exploratory Workshop on Testing, a peer discussion event on ideas in and around software testing. The third CEWT, held a week or so ago, had the topic Why do we Test, and What is Testing Anyway?  With six speakers and 12 participants in total, there was scope for a variety of viewpoints and perspectives to be voiced – and we heard them – but I’ll pull out just three particular themes in my reflection on the event.

Lee Hawkins viewed testing through the eyes of different players in the wider software development industry, and suggested aspects of what testing could be to them. For tools vendors or commercial conference organisers, testing is an activity from which money can be made; for financial officers, testing is an expense, something to be balanced against its return and other costs; for some managers and developers and even testers, testing is something to be automated and forgotten.

James Coombes also considered a range of actors, but he was reporting on how each of them – at his work – contribute to an overall testing effort: the developer, tester, security expert, technical author, support operator, integration tester, manager and customer. Each person’s primary contribution in this approach is their expertise, their domain knowledge, their different emphasis, their different lenses through which to view the product.

In discussion, we noted that the co-ordination of this kind of activity is non-trivial and, to some extent, unofficial and outside of standard process. Personal relationships and the particular individuals concerned can easily make or break it.

There was also some debate about whether customers are testing a product when they use it. It’s certainly the case that they may find issues, but should we regard testing as inherent in “normal use”? Does testing require intent on the part of the “tester”?

Karo Stoltzenburg focussed on an individual tester’s reasons for testing and concluded that she tests because it makes her happy. Her talk was a description of the kinds of testing she’d done, of herself, to arrive at this understanding and then to try to see whether her own experience can be generalised, and to who. She suggested that we, as testers, sell our craft short and called on us to tell others what a great job it is!

One particularly motivating slide gave a selection of responses from her work colleagues to the question “why do you test?”, which included: it’s like a puzzle, variety of challenges, a proper outlet for my inner pedant, it’s fun. Lee’s talk also included a set of people who found testing fun and he characterised them as people like us, people who love the craft of software testing.

Later, in his blog post about this event, Lee described the CEWT participants as “a passionate group of testers”. There was an interesting conversation thread in which we asked why we were there, doing what we were doing, and what we’d do with whatever we got from it.

And, of course, understanding our own motivations is interesting, but I think the conversations in the event rarely got very deeply into the motivations of other stakeholders who ask for, or just expect, testing. We did discuss questions such as “if the testing is being done by others, why do we need testers?” and again wondered whether what others were doing was testing, or contributing to testing, or both. Harry Collins’ The Shape of Actions has things to say about the way in which activities can be broken down and viewed differently at different resolutions.

But to return to Karo’s challenge to us: does an event like CEWT essentially have the choir singing to itself? We know why we like testing and we know that we implicitly value testing, because we do it and because we gave up a Sunday to talk about it. But we’re self-selecting. The event can help us to support each other and improve ourselves and the work we do, but can it change other’s views of testing? Should it? Why?

Michael Ambrose described a project concerned with increasing the software development skills of his test team. The aim was to write code in order to reduce the manual effort required to support testing of a wide range of platforms without reducing the coverage (in terms of the platform set).

Naturally, this begs questions such as: is the new software doing testing? is it replacing testing (and if so to what extent?) or augmenting testing? is it extending testing scope (e.g. by freeing testers to take on work that currently isn’t being done at all)? what dimensions of coverage might be increased, reduced? how can its success be evaluated?

We talked a little during the day about the tacit testing that goes on outside of that which was planned or expected or intended by a tester: those things that a human will spot “in passing” that an algorithm would not even consider.

Does that tacit investigation fit into the testing/checking distinction? If so, it’s surely in testing. But, again, how important is intent in testing activity? Is it sufficient to set out with the intent to test, and then anything done during that activity is testing?  What kind of stuff that happens in a tester’s day might not be regarded as testing? One participant gave an example of projects on which 85% of effort was spent covering their arse.

In his talk, Aleksandar Simic presented a diary of two days in his role as a tester, and categorised what he did in various ways. These categorisations intriguingly included “obsession” which described how he didn’t want to let an issue go, and how he spent his own time building background knowledge to help him at work. He talked about how he is keeping a daily diary of work done and his feelings about that work, and looking for patterns across them to help him to improve himself.

This is challenging. It’s easy to mislead and be misled by ourselves. Seeing through our own rose-tinted spectacles involves being prepared to accept that they exist and need to be at least cleaned if not removed.

But is that kind of sense-making, data gathering and analysis a testing activity? I would like to regard it as such. In my own talk I explained how I had explored a definition of testing from Explore It! and also explored my reaction to it, and how these processes – and others – ran in parallel, and overlapped with, and impacted on each other. I r
ejected testing as simply linear and tried to find my own definition that encompasses the gloriously messy activity that it can be (for me).

One comment on my definition – which inverted a concern that I have about it – was that it is sufficiently open that people could buy into it, and read into it, particularly non-testers. This touches again on the topic of taking testing out of the testing bubble.

There was some thought that distinctions like testing vs checking – which have not been universally approved of in the wider testing community; some thinking that it is simply navel-gazing and semantics – are useful as a tool for conversations with non-testers. An example might be explaining why a unit test suite, valuable as it might be, need not be all that testing is.

Perhaps that’s a useful finding for us: that we can get value from events like these by going away and being open to talking about testing, explaining it, justifying it, in ways that other parties can engage with. By doing that we might (a) spread the word about testing,  (b) understand what others want and need from it, and (c) have fun.

I am intellectually buoyed by events like this, and also not a little proud to see something I created providing a forum for, and returning pleasure and value to, others. CEWT 4 anyone?