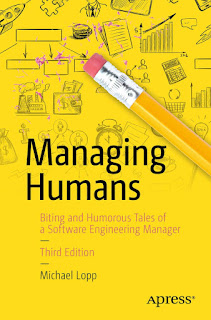 Do you work with people? Are you a person? Can you read?

Are you reading a book?

Yes? Go and find that book and put it away now. Go on, and then come back. No? Good news, I am about to help you out.

Ready? OK: you should immediately read Managing Humans by Michael Lopp because it contains something of value to you. I can’t tell you what it is, because I don’t know you and your interests and your circumstances and your experiences and your co-workers and the other myriad things that make up who you are with your working head on.

But what I can tell you is that there is something – at least one thing, and probably more – in here that will have you nodding along in agreement, or gawping at the perspective that challenges your own, or shaking your head at the unwarranted certainty of a curt categorisation of colleagues and then shortly afterwards finding yourself mentally fitting your company’s staff to it, and adding the archetypes that you need that Lopp doesn’t describe.

Lopp – or Rands on his blog, Rands in Repose – writes from vast experience across a bunch of companies you have heard of. Slack, for now, but also Pinterest, Apple, Netscape and Borland amongst others. His prose has the patina of a practitioner and, as with Managing the Unmanageable by Mantle and Lichty that I reviewed recently, if you have any experience of working in a tech company you’ll find episodes or characters or atmospheres that you can use as touch points to satisfy yourself that Lopp is a reliable witness, a plausible primary source, even if some of his stories and their participants are composites.

For me, interested at the moment specifically in resources that a new manager might appreciate, the message isn’t so different from Mantle and Lichty’s either. You can read my summary of that but Lopp characterises his take on it succinctly in the first words of the book:

Don’t be a prick.

The 50 or so stylish essays that follow (in the third edition; I haven’t read earlier ones) cover management and leadership of others, interpersonal relationships at any level, and self-management, all intertwined with the challenges of having to operate in a corporate environment, the structure and logic of which you’ll have a better grasp of at some times than others.

Lopp offers short shrift the to the oft-discussed distinction between management and leadership and a sharp pin to the balloon that is the management ego in the book’s glossary (which is also online):

The same glossary defines some terms that you’ve probably come across but would have preferred not to:

We all have managers, and whether you’re the director of engineering or an individual contributor, one of your jobs is to figure your manager out.

A case of do what I say, not what I do, perhaps? I’m not so sure. More likely just one of those things. This book describes how Lopp goes about making sense of, and dealing with the world. He explains at length how and where and why he gathers his data, how he analyses it, what conclusions he draws from it, and the actions he takes as a result.

But that can’t prepare him for all eventualities, can’t account for all the googlies, can’t prevent or catch all errors, can’t predict all the points at which the rails and the wheels lose contact. All day long, we’re in the real world, dealing with real humans in real time. And one of the key messages in the book, and laid out very early in it, is this:

Every single person with whom you work has a vastly different set of needs. They are chaotic beautiful snowflakes.

… that means great managers have to work terribly hard to see the subtle differences in each of the people working with them.

As I reflect on the book while I’m writing this – and the writing is key for me to understand my reflections – I begin to see it as a guide for making a manual: a manual for becoming a better manager (big and small “m”) of people. Lopp’s descriptions are of his way of making his manual. And though his manual changes over time his guidance on constructing it do not or, at least, not as much.

You might feel that there’s a little too much cop out, places where he says that he can’t tell you what the best course of action is because your mileage will vary. But, for me, that’s a self-evident truth. Any book that purports to tell me the right way to act in a situation devoid of the context of that particular instance of that kind of situation with those actors at that time is going to need some other extremely redeeming feature to get a place on my shelves. What you get from Lopp is the justification, the method or analysis (or both) and his result, with an implicit or explicit invitation to find your own.

For example, when he breaks meeting attendees down into personalities such as The Snake, Curveball Kurt, Sally Synthesizer, Chatty Patty, The Anchor and others he’s not telling you that your meetings must have the same cast (although doubtless some recognition will exist). He is saying that if you were to observe with the same diligence that he has and does, you could find your own heuristics for navigating the tedium and politics, and heading off those ridiculous outcomes.

Lopp was a tester earlier in his career and one of my favourite blogs of his is The QA Mindset which ends like this:

It’s not that QA can discover what is wrong, they intimately understand what is right and they unfailingly strive to push the product in that direction.

I believe these are humans you want in the building.

This book is the QA mindset applied to interaction with other people in the face of their, and your, idiosyncrasies and the final chapter, titled Chaotic, Beautiful Snowflakes, reminds us of that:

The hard work of great leadership isn’t just managing the expected tasks that we can predict—it’s the art of successfully traversing the unexpected.