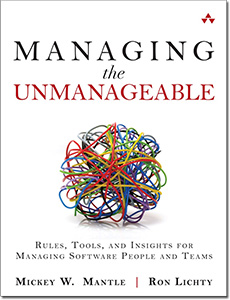 For work reasons, I’ve recently become interested in resources for those new to line management. I put out an appeal for suggestions on Twitter and Managing The Unmanageable was recommended by Thomas Ponnet, with a little cautious reservation:

@qahiccupps Hope you enjoy it. I don’t agree with everything but that comes with the job description. Not all translates for my context.

This quote from the book’s preface sets up the authors’ intent nicely:

There is no methodology for the newly anointed development manager charged with managing, leading, guiding, and reviewing the performance of a team of programmers — often, the team he was on just days before. There are no off-the-shelf approaches. Unlike project managers, who devote hours and hours of study toward certifcation in their chosen career path, development managers often win their management roles primarily from having been stellar coders while displaying a modicum of people skills.

The book is long – over-long for my taste – and, rather than try to rehash the whole thing, I’ll take the liberty of making an exceedingly crude precis:

Which is where a book like this can help – it’s a brain dump of wisdom from the two authors mostly, but also from a bunch of others who offer nugget-sized bites of experience such as

I’ve used Andy Grove’s phrase innumerable times to coach my managers and directors of programming teams. When confronted with a problem, they can’t just “raise a red ﬂag.” I’m always available when needed, but good software managers find ways to solve problems without my involvement or executive management direction.

And here’s handful of others that chimed with me:

David made this statement to make the point to his management team that managers have “real” work to do; that the seemingly urgent—e-mail, meetings, the routine—could easily fill a day. Only by being intentional about how we use our days can managers overcome letting that happen

If you’re a people manager, your people are far more important than anything else you’re working on – Tim Swihart

Tim notes, “If a team member drops by at an awkward time and wants to chat, set aside what you’re doing and pay attention. They may be building up the courage to tell you something big. I’ve noticed this to be especially true when the sudden chatter isn’t somebody who normally drops by for idle conversation.”

The statement is a match for our own experience.

We have two ears and one mouth. Use them in this ratio – Kimberly Wiefling

While I love theory and can happily spend time in talking shops, dissecting semantics and splitting hairs, as my recent MEWT experience showed …

@qahiccupps wields distinctions like a surgeon wields a scalpel #mewt

… I also recognise the value of activity to explore, inform, test, and back up the theory. I like to think of myself, still, as a practitioner, and Managing the Unmanageable is a book written by practitioners and grounded in their practice, with examples drawn liberally from it.

It’s unlikely, as Thomas Ponnet suggested, and I’d agree, to fit exactly with everything that you’re doing right now with the team you have in the place you’re working – especially as some of it is very specific to managing software developers. Parts of it will probably jar too. For instance, I found the suggested  approach to levels of seniority too simplistic.

But what it can do is give you another perspective, or inspiration, or perhaps fire warning shots across your bow from some position not too dissimilar to yours, and rooted in the real world of managing people in technical disciplines.
Image: http://www.managingtheunmanageable.net/