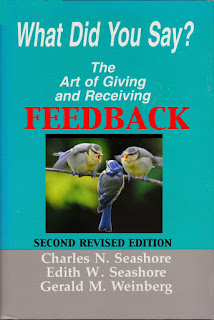 The Test team book club at Linguamatics is currently reading What Did You Say? The Art of Giving and Receiving Feedback. Here’s a couple of quotes that I picked out for our last session:

Against this: my instinct, my gut, and my experience. And a sense of goodwill, built up over time, over repeated interactions, over sometimes difficult sessions where I had tried to demonstrate that I do care to assist and support and advise because I want to help Russell to be the best he can be, in the respects that matter to him and for his work.

But I went ahead anyway. The potential benefit and the goodwill in the bank outweighed the risks, I calculated, on this occasion. And I gave my feedback. And Russell agreed with me. And I breathed a deep internal sigh of relief.

Comparing this anecdote to the quotes I pulled from the book:

I use this episode as an example not because it ended well, particularly, but because it’s an illustration for me of how much I have been influenced by What Did You Say? in the couple of years since I first read it. I consciously I go about my day-to-day business, doing my best to be careful about when I choose to offer feedback, about when I deliberately choose not to, and about picking up and picking up on any feedback that’s coming my way in return.

I try to treat this as a testing task where I can, in the sense that I try hard to observe my own actions and the responses they generate, and I think about ways in which they might be related and how I might approach things differently in the next exchange, or at another time, with this person, or someone else.

Easier said than done, of course, so I’ll finish with another quote from the book, another quote that I’ve taken to heart and act on, that regularly helps guide me with pretty much everything that I’ve said above:

Don’t concentrate on giving feedback; concentrate on being congruent – responding to the other person, to yourself, and to the here-and-now situation. Don’t go around hunting for opportunities to give feedback, because feedback is effective only when the need arises naturally out of congruent interactions.

Some details have been changed.
Image: Leanpub