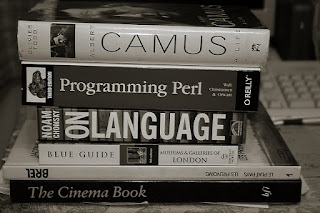 There’s a girl in the park playing with an enormous bunch of balloons. She’s running around, clearly very happy to have such a pretty and fun toy. She seems entranced by the way the balloons have life of their own: they hold themselves up, needing no support from her, and animatedly jostle one another as she moves. Her grip on the strings, twined together in her fist, is quite loose, and she’s in danger of losing them if she’s not careful. And, of course, she isn’t and she does.

The balloons float up and up and up from her released grasp, past a tall tree in which two nude men are arm wrestling. On their wrists each sports a watch showing ten minutes past ten, despite the time being 12:57. With their free arms they reach out and catch the balloons as they bobble by, bursting every last one of them, and smiling.

In the second exercise of Mira Nair‘s Storytelling workshop, which ran at last night’s Cambridge Tester Meetup, we were asked to write a story that included three items chosen at random from a selection. I had balloons, entwined arms with hands clasped, and a clock showing 10:10. Prior to that we’d been provided with a story structure and asked to fill it with content. Later, to take existing stories and compress them to tweet length.

The workshop’s practical aspects focused mostly on structure, including on the STAR mnemonic which is intended to help interviewees give good answers to behaviour questions such as “Give me an example of when you …”. The letters stand for Situation, Task, Action, and Result and a story according to them should run like this:

The first exercise in the workshop gave us that skeleton and asked us to fit a recent episode to it. Some found it liberating (“The structure draws the story out of whatever I put in”) while others struggled (“I couldn’t find something that I thought would make a good story”). At work, Mira suggests, we’ll more often have the problem of something to present and needing a structure to bring the best out of it than the reverse.

This was reinforced by the second exercise which provided content but, interestingly, didn’t require any structure of us. More people found this more straightforward, the content anchoring everything else.

In the story I gave at the beginning I experimented with another narrative device Mira talked about, the False Start, in which an apparently predictable beginning leads to an unexpected ending and can result (with judicious use) in increased audience engagement.

The final exercise cut the content problem a different way: take an existing description (a couple of software bugs were provided) and summarise it in 140 characters or less. As testers, we author reports of potential issues regularly, and part of the skill of transmitting those reports is finding a way to quickly engage our audience, which will often mean extracting the essentials and conveying them efficiently.

Different approaches were taken here: I boiled the descriptions down as I might at work; others took the Twitter aspects and used hashtags as shorthand, effectively importing context cheaply, and others used humour to convey a sense of violated expectation.

One of the things I look for in these kinds of events is the questions they generate, the trains of thought I can follow at my leisure, the connections I can make, … Here’s a few:

I have written before about the C’s I look for in communication: conciseness, completeness, correctness, clarity, context. I realised in this workshop that I can add another: compelling.
Image: https://flic.kr/p/97ba7K