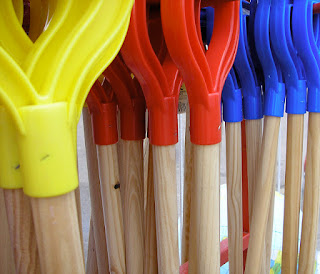 Back in Part 1 I started this series of posts one Sunday morning with a very small thought on tooling. (Thinking is a tool.) I let my mind wander over the topic and found that I had opinions, knowledge, ideas, and connections that I hadn’t made explicit before, or perhaps only in part. (Mind-wandering is a tool.)

I wrote the stuff that I was thinking down. (Writing is a tool.) Actually, I typed the stuff that I was thinking up.1 I have recently been teaching myself to touch type in a more traditional style to (a) stop the twinges I was feeling in my right hand from over-extension for some key combinations and (b) become a faster, more consistent, typist so that my thoughts are less mediated in their transmission to a file. (Typing is a tool.)

I reviewed and organised my thoughts and notes. With each review, each categorisation, each classification, each arrangement, each period of reflection away from the piece of writing, I found more thoughts. (Reviewing and rationalisation and reflection are tools.) I challenged myself to explore ideas further, to tease out my intuitions, to try to understand my motivations, to dig deeper into whatever point it was I thought I was making. (Exploration is a tool.)

That the boundaries are not clear is an interesting observation, I find, and it came about only because I was trying to list a set of tools used somewhat implicitly here. (Lists are tools.) Not knowing which tool we are using suggests that we can use tools without needing to know that we are using them at all. Part 2 started off with this:

And I discussed how this does not necessarily mean that every use of the hammer is mindless. But I now also wonder whether it’s possible to proceed without even realising that you have a hammer. With non-physical tools – such as those I’ve listed above – this seems to me a distinct risk. Side-effects of it might include that you don’t know how you arrived at solutions and so can’t easily generalise them, you don’t realise that you are missing out large parts of the search space and so can’t consider it; you don’t provide yourself with the opportunity to look for improvement, …

I think that reflection and introspection help me to mitigate those risks, to some extent. Although, of course, some of the risks themselves will be unknown unknowns and so less amenable to mitigation without additional effort being made to make them known. (Another problem to be solved. But which tool to use?)

The more I practise that kind of reflection the more practised I become at recognising simultaneously the problem and meta problems around it, or the problem space and the context of which is it a part, or the specific problem instance and the general problem class. I have had my fingers burned trying to verbalise these things to others, and I probably now over-compensate through clunky conversational tactics to try to make clear that I’m shifting modes of thinking.

Another thought on sub-conscious problem-solving approaches: perhaps the recognition (correct or not) of an instance of a nail-like problem triggers a particular hammer (tacit or explicit):

When it looks enough like a nail, I hit it.

But every decision to use a tool is also an opportunity to make a different decision. Deciding to think about how and why a decision was made gives insight that can be useful next time a decision is made, including the realisation that a decision is being made.

Part 1 of this essay was in the domain of cleaning,  Part 2 more general and theoretical, and Part 3 focused back on work. They are grouped that way and written in that order because I found it helpful and convenient, but the way the thoughts came to me was messier, non-linear, fragmentary. I used tools to note down the thoughts: my phone, scraps of paper, my notebook, text files on the computer, … Tools to preserve the output of tools to provide input to tools that will themselves generate output on the topic of tools.

When I started out I had no particular problem to solve – beyond my own interest in exploring a thought – and so no particular need for a tool, although I have deployed several, deliberately and not. But, ironies aside, that’s fine with me: quite apart from any benefits that may accrue (and there may be none, to me or you, y’know) the process itself is enjoyable, intellectually challenging, and satisfying for me. And exercising with my tools keeps me and them in some kind of working order too.
Image: https://flic.kr/p/qjYUm

1.  Writing down but typing up? There’s a thought for another day.