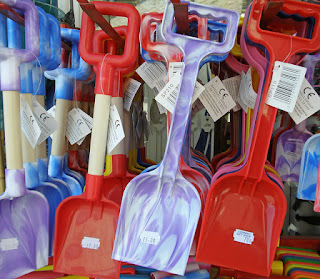 In Part 1, I described my Sunday morning Cleaning the Bathroom problem and how I think about the tools I’m using, the way I use them, and why.  In particular I talked about using a credit card as a scraper for the grotty build up around the sides of the bath and sink. On the particular Sunday that kicked this chain of thoughts off, I noticed myself picking the card up and using a corner of it vertically, rather than its edge horizontally, to remove some guff that was collecting around the base of a tap.

This is something I’ve been doing regularly for a while now but, before I got the scraper, it was a job I used an old toothbrush for. In Part 1 I recounted a number of conscious decisions around the way I keep the littlest room spic and span, but switching to use the card on the tap wasn’t one I could recall making.

Observing myself taking a tool I’d specifically obtained for one purpose and using it for another put me in mind of this old saw:

Until I looked it up1 just now I hadn’t heard this saying called The Law of the Instrument nor come across the slightly subtler formulation that Wikipedia attributes to Maslow:

I suppose it is tempting, if the only tool you have is a hammer, to treat everything as if it were a nail.

Given the first of those two variants, it’s easy to imagine that the universal application of the hammer is a mindless option – and we’ve all probably seen instances of that – but I think that, generally, tools are used in places where they are inappropriate or sub-optimal for a variety of reasons, and temptations, as Maslow would have it.

There are three explicit variables in play in this space: the problem, the tool, and the person using the tool. Here’s one way I explored it, by considering the possible scenarios involving the tool and choice of tool, and trying to understand how the person might have got there:

I recognise the shape of the problem, and I have a tool that I know fits it

I recognise the shape of the problem, but I don’t have a tool that I know fits it

I don’t recognise the shape of the problem

The latter class can be particularly galling because it contains two sub-cases:

I don’t, or am not prepared to,  recognise the existence of a problem

I recognise that there is no problem

As I enumerate these cases, I begin to think that they apply not just to the person with just the hammer, but to all of us, every time we do or not use any tool for any task.

In using any tool at all you are making a decision – implicitly or explicitly. When you enter three commands into the shell to get something to run you are either accepting that you will not use a script to do it for you, and avoid the typos, being in the wrong directory and so on, or you are missing out on the knowledge that a script could help you, perhaps because you don’t care to avoid that time being spent on typing and typos.

In choosing to use the same tool that you always use for editing a file you are missing out on the chance to learn that there is something better out there. But also avoiding paying the costs of learning that new thing. Do you do that consciously?

I started trying to map these kinds of observations back onto my own exploration of ways in which I could satisfy my bathroom mission. As I did this, I came to realise that I have mostly cast the problem recognition and tool choice as something that is done from a position of knowledge of the problem. But my own experience shows me that it’s less clear-cut than that.

In this area, I love Weinberg’s definition of a problem:

A problem is a difference between things as desired and things as perceived.

I love it not least because it reminds me that there are multiple levers that can be pulled when confronted with a problem. If I am struggling with the shape of the problem I can change it, change my view of it, change my desires about what it should be. Opening out this way in turn reminds
me that exploration of the space is an incredibly useful way to begin to understand which of those levers I can and/or should be pulling: perhaps if I can remove the things that look like nails, I can even put down my hammer.

Sometimes I find that I can learn more about the shape of the problem by using the tools I have and discovering their weaknesses. Sometimes I can only imagine a possible solution by attempting to resolve the problem the wrong way. If I do that tacitly, deliberately, then I’m here:

I recognise the shape of the problem, but I don’t have a tool that I know fits it … so I will explore the problem space with the tools I have, deliberately experimenting and hoping to learn more about the tools, the space, the problem, myself.

And I might find that I’m then saying “aha, if only I had something which could …” or “oh, so perhaps I don’t really need …”

But this means deliberately deciding to spend some of whatever budget is available for problem solving on the meta task of understanding the problem. Stated as baldly as this it seems obvious that someone with a problem might consider that, doesn’t it? But how many times have you seen something else happen?

How many times have you seen only a tiny fraction of the capacity of some tool being exploited? For anything more complicated than a hammer, it’s easy not to know that there are capabilities not being used. The Law of the Instrument can be applied within tools too. If I don’t know that Word can do mail merge, I might find myself buying a new tool to do it, for example.

On the other hand, creative reuse can be a good way to get additional value from an existing tool. A hammer can be used for things other than hitting a nail – as a door stop, as a lever, to encourage some seized machinery to become separated, as a counterbalance, as a pendulum weight, as a goal post, and might be a sufficiently good substitute for the “proper” tool in any given situation, at any given time. And, in fact, imagining ways to reuse a tool can itself be a useful way to get creative juices flowing.

Tool use is inherent in software development and the kinds of choices I’ve described above are being made all the time for all sorts of reasons, including those that I’ve given. It was interesting to me, as I enumerated these thoughts, that although in my bathroom cleaning example I have no reason to be anything other than on the level – there are no bathroom politics in our house and the stakes are not high in any dimension – and despite doing my best to be as clear to myself about what I’m thinking and trying at any given time as I can, I still proceeded to make choices unconsciously, to not take account of useful evidence, and to continue with one line of exploration past the point at which its utility was exhausted.

In Part 3 I’ll try and recast these thoughts in terms of some practical examples from the world of work rather than bathroom cleaning.
Image: https://flic.kr/p/eFAoHQ

1. Given where I come from, and its traditional rivalry with Birmingham, I’m amused that the hammer that’s applied to every problem is sometimes called a Birmingham Screwdriver.