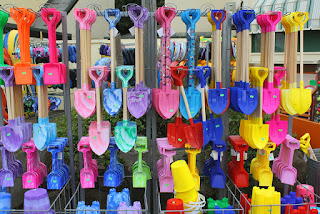 I’ve got a set of tools to help with this task. Some are traditional and obvious, including sponge, J-cloth, glass cleaner, bathroom cleaner, toilet brush, Marigolds, … Some are reasonably well known but not mainstream, including citric acid crystals, squeegee, old toothbrush, … and some are more niche, including a credit card, flannel, and car windscreen coating, …

By tool I mean something as basic as this, from Oxford Dictionaries:

A thing used to help perform a job

And I’m being generous in my interpretation of job too – pretty much anything that it is desired to accomplish is a job for the purposes of this discussion.

Harry Collins, in The Shape of Actions, distinguishes tools from proxies and novelties based on the extent to which they extend our capacity to do the job or can stand in for us in doing the job itself. I find this stimulating but I’m not going to be concerned with it here. (If you’re interested, Michael Corum makes an admirable attempt to summarise what is a challenging book in this blog post. My thoughts on it are less comprehensive: here and here.)

I don’t think there’s any action in my cleaning the bathroom that doesn’t employ some kind of tool by the definition I’ve chosen, so any consideration of how well I’m achieving my goal will implicitly include some element of how well the tool, and my use of the tool, is contributing to it. Which often means that I’m wondering whether I have the right set of tools and am getting the best out of them. Which is where I was on Sunday morning; cleaning the shower screen.

A few years ago, when we had a shower curtain, I didn’t need to clean it every week but could wait until the soap and limescale grot had built up and then put it through the washing machine. Although this clearly meant that there was known uncleanliness most weeks it was a decent enough compromise, especially since we bought shower curtains with frosted patterns on them which were less likely to be obviously dirty. (The shower curtain is a tool.)

When we replaced the curtain with a folding glass screen, I simply transferred the shower curtain cleaning cycle to it. And that didn’t work well. I found that I was spending a long time every few weeks trying to get stacks of accumulated crud off the thing. Which was very hard work. And the screen, with its clear glass, didn’t hide any aspect of the problem either. In fact, it appeared to be more susceptible to splashes leaving a mark than the curtain, and it looked horrible most of the time.

So I experimented with the tools I was using. I explored different cleaning products – amongst them vinegar, newspaper, lemon juice, various glass sprays, and citric acid – and a variety of cloth and sponge applicators. I tried varying my technique, I tried varying the frequency – I now clean it every week – and I introduced the squeegee to remove some of the dirtiness after every shower.

This made an improvement in terms of result – the shower screen looked great on Sundays and decent for most of the week – but I was still putting more effort than I’d really like into maintaining the screen’s appearance. And so I started trying to reframe the problem. Could we stop caring about cleanliness? If we could, the problem would simply go away! Yeah! But that suggestion wasn’t well received by the bathroom project stakeholders.

The last of these seemed interesting because I could think of a way in which this was similar to a problem that I already understood. I have sometimes used an additive in our car’s screenwash that makes water less likely to stick around on the windscreen, and wondered whether I could use it on the bathroom screen.

The cost of researching it – not least because I imagined I’d need to spend time working out what materials my shower was made of and checking for compatibility with any chemicals and so on – and the possible difficulty of application and the likely cost and the fear of getting it wrong and ruining the screen all conspired to put me off looking into it very eagerly. But the lack of desired returns from my other strategies meant that eventually I came back to it.

Making a cup of tea at work shortly afterwards, I was bellyaching to a colleague about the problem, and my idea of putting some additive into my cleaning water. And I got a lucky break! It turned out he had recently bought some stuff for coating his car windscreen which turned out to be suitable also for showers and so had applied it to both, and he was very happy with it.

Accepting his recommendation cut down my potential research effort, making the task more tractable in the short term. So I bought a bottle of the same product he’d used, read the instructions, watched the online videos about how to apply it, checked that I could unapply it, cleaned the screen very thoroughly, and finally applied it (a not insignificant investment in time). And I have been really pleased with the results. Ten or so weeks later, I’m still cleaning once a week but with the squeegee and the coating it’s a much lighter clean and the screen looks good for the whole seven days.

Here’s another example: initially I used washing up sponges for cleaning the bathroom but I found that they tended to leave tiny grains of their abrasive layer behind, which I then had to clean in some other way than with the sponge itself. So I started using an old washing up sponge (when the one from the kitchen needed replacing I would promote it to bathroom sponge) but that didn’t have the scouring power I wanted. So then I wondered whether there were specialist bathroom-cleaning sponges – I know, so naive – and I now use one of them. But then I noticed that there was some accumulated soap stuff that the sponge struggled to remove, stuff that was hard to see against the white enamel of the bath until it had built up into a relatively thick layer.

I found that I could scra
tch this residue away with my nail and so I could generate a set of properties I might look for in a tool to do the same job better: flexible, strong, thin, easy to handle in confined spaces, non-damaging to enamel.

When confronted by a tool-selection problem with constraints, and without a solution, I find that going and poking around in my toolbox or my shed can be really helpful. I might not be able to imagine what kind of tool fits all of the requirements, but I can probably imagine which of those requirements might be satisfied by the tools, or potential tools that I can see in front of me.

I maintain several boxes of bits and pieces in the shed which are invaluable in fixing stuff and also for daughters’ robot building projects: 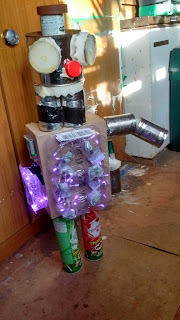 Rummaging around in one of them, I came across an old credit card, which works perfectly as a scraper. As with the car windscreen coating, it turned out that others have been here before me but that doesn’t negate the utility of the tool in my context, even if it does remind me that there were probably faster ways to this solution.

So, shiny bathrooms are great, and the journey to the symbiotic relationship of a suitable tool used in a suitable way to solve the right problem need not be linear or simple. But what here is relevant to work, and testing? Part 2 will begin to think about that.
Image: https://flic.kr/p/au9PCG

1. I do the washing up every day too! That’s right, I’m a well-adjusted modern man, as well as handsome, young and with a full head of my own hair!