Our Experiments with a Webinar

Lee Hawkins inspired me to share my own experience of the webinar that we hosted together last week (14 May 2015). Unicom contacted me few months ago to be the keynote speaker at their conference in Melbourne. I agreed and later they asked me if I would like to present a webinar too for which I agreed too because the topic suggested by them sounded interesting to me. To be honest with you (even though I don’t have to), I mostly find webinars boring because often they have a single presenter who is either talking to herself or trying to sell something to the listeners. Well, I do not have both of these qualities and I am afraid that if someone sees me talking to myself, they will consider me well, ummm, not in the right mind; which I anyways am.
I still haven’t told you the topic of this webinar. It was “Business Value of Testing”. I haven’t also told you how Lee came to become a co-presenter. Well, since I don’t much like listening to webinars (people talking to themselves or selling to listeners or both), I wanted to do a webinar which was more interactive and interesting for listeners (all three of them…or may be more). I have no idea how many were there listening, but I got few comments afterwards which were mostly positive. May be people just wanted me to feel good even though they didn’t mean to. So, I asked Lee if he would like to present with me so that we can make this webinar more useful to listeners by making it more of a conversation with them (even though we put them on mute). Lee being a gentleman and my good mate agreed to help out. It turned out that because of our love and passion for testing, we enjoyed the webinar a lot. We were talking, discussing, somewhat arguing, referring to books, people and quotes and in all we were having fun. I am not sure whether listeners were having fun or not, though. I worked for a radio station as a show host during university days and that was fun (if they had paid me well, I’d still be one). I guess I was pretending that I was a radio host in this webinar too. Otherwise it is boring (and a bit strange) to talk to a laptop screen from up close in a conference room.
The webinar can be found at https://www.youtube.com/watch?v=UM79oNi4rng
Lee’s experience of this webinar can be read at:
https://therockertester.wordpress.com/2015/05/19/some-firsts-presenting-a-webinar-and-visiting-estonia/
The other Unicom presentation (a real one) is on 27 May at Melbourne Convention and Exhibition Centre. I will be talking about the Future of Testing. I know you have probably listened to others talking on this same subject many times before but you know what, no one can predict future and therefore it is going to slightly different than all other talks (unless someone recognizes their work). :o)
The full program can be found here:
http://www.nextgentesting.org/melbourne/2015/Next_Generation_Testing/program
Organizers have offered me a 50% discount for anyone who is interested in attending. So if you would like to attend, use this opportunity. 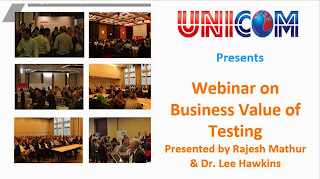