The On in Wrong? 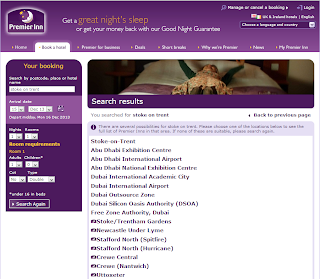 I am not Ben Simo and this is not exactly a security issue at Healthcare.gov but I was surprised to find that when I searched for Stoke on Trent at Premier Inn‘s web site I was given a list of matches that included Abu Dhabi and Dubai ahead of the less glamorous but geographically more plausible Crewe and Uttoxeter.

As I was on a mission to get a hotel near my brother’s house at a price I was prepared to pay over Christmas I sailed gaily on past this oddity and, despite being a little frustrated by other aspects of the search result presentation and site navigation, booked the room I needed pretty easily.

After that I went back and with a couple of minutes poking about, found that results are a mixture of at least proximity and quite relaxed string matching. In the case above, on appears in Abu Dhabi Exhibition Centre, Abu Dhabi International Airport, Dubai Silicon Oasis Authority (DSOA) and others. (Although searching for just on does not find Stoke-on-Trent.)

Interested now, I invested another couple of minutes: could I get a list of all hotels by entering all letters from a to z separated by spaces? No, the number of search results seem to be limited. Entering an equivalent regular expression [a-z] returns a different list of results, although none of the ones I tried actually had hotels near to them. Entering a-z finds the same list, and other regular expression operators are not recognised either. Entering a simple space finds nothing but then it seems that preceding or following your search with a space also finds nothing. I could go on: it isn’t hard to get to unhelpful or inconsistent places.

The train of thought this exercise set off lead to last week’s post about consumers and connoisseurs. As a consumer I skipped past the unexpected search results and completed my business; as a connoisseur I would want to discuss the merits of the search logic and technology being used.

Which kinds of person you represent when testing, and at what times, can be important, but other functions of the business may also attach importance to the distinction: Premier Inn would (I imagine) say that they are primarily about the consumer and, until the consumers start voting with their feet, for Premier Inn, against their other priorities, the on could justifiably be in carry on as you are.
Image: http://www.premierinn.com