Ed. Note – This is Part 1 of a Two-Part blog post produced by James Christie, supported by the AST Committee on Standards and Professional Practices. Part 2 is here. To learn more about why so many senior software testers are interested in Cynefin, come to CAST 2017 and see Dave Snowden’s Keynote.

On May 2nd I attended Dave Snowden’s masterclass in New York, “A leader’s framework for decision making: managing complex projects using Cynefin”, at the Test Leadership Congress. For several years I have been following Dave’s work and I was keen to hear him speak in person. Dave is a gifted communicator, but he moves through his material fast, very fast. In a full day class he threw out a huge range of information, insights and arguments. I was writing frantically throughout, capturing key ideas and phrases I could research in detail later.

It was an extremely valuable day. All of it was relevant to software development, and therefore indirectly to testing. However, it would require a small book to do justice to Dave’s ideas. I will restrict myself to two posts in which I will concentrate on a few key themes that struck me as being particularly important to the testing community.

We need to understand how the world works or we will fail to understand the problems we face. We won’t recognise what success might look like, nor will we be able to anticipate unacceptable failure till we are beaten over the head, and we will select the wrong techniques to address problems.

Dave used a slide with this quote from Mark Twain. It’s an important point. Software development and testing has been plagued over the years by unquestioned assumptions and beliefs that we were paid well to take for granted, without asking awkward questions, but which just ain’t so. And they’ve got us into endless trouble. 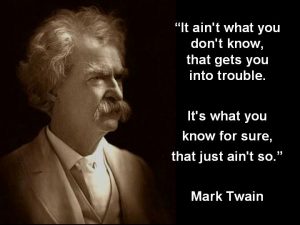 A persistent damaging feature of software development over the years has been the illusion that is a neater, more orderly process than it really is. We craved certainty, fondly imagining that if we just put a bit more effort and expertise into the upfront analysis and requirements then good, experienced professionals can predictably develop high quality applications. It hardly ever panned out that way, and the cruel twist was that the people who finally managed to crank out something workable picked up the blame for the lack of perfection.

Fred Brooks made the point superbly in his classic paper, “No Silver Bullet”.

“The truth is, the client does not know what he wants. The client usually does not know what questions must be answered, and he has almost never thought of the problem in the detail necessary for specification. … in planning any software-design activity, it is necessary to allow for an extensive iteration between the client and the designer as part of the system definition.

…… it is really impossible for a client, even working with a software engineer, to specify completely, precisely, and correctly the exact requirements of a modern software product before trying some versions of the product.”

So iteration is required, but that doesn’t mean simply taking a linear process and repeating it. Understanding and applying Cynefin does not mean tackling problems in familiar ways but with a new vocabulary. It means thinking about the world in a different way, drawing on lessons from complexity science, cognitive neuroscience and biological anthropology.

Cynefin is not based on successful individual cases, or on ideology, or on wishful thinking. Methods that are rooted in successful cases are suspect because of the survivorship bias (how many failed projects did the same thing?), and because people do not remember clearly and accurately what they did after the event; they reinterpret their actions dependent on the outcome. Cynefin is rooted in science and the way things are, the way systems behave, and the way that people behave. Developing software is an activity carried out by humans, for humans, mostly in social organisations. If we follow methods that are not rooted in reality, in science and which don’t allow for the way people behave then we will fail.

Dave Snowden often uses the philosophical phrase “a priori”, usually in the sense of saying that something is wrong a priori. A priori knowledge is based on theoretical deduction, or on mathematics, or the logic of the language in which the proposition is stated. We can say that certain things are true or false a priori, without having to refer to experience. Knowledge based on experience is a posteriori.

The distinction is important in the debate over the software testing standard ISO 29119. The ISO standards lobby has not attempted to defend 29119 on either a priori or on a posteriori grounds. The standard has its roots in linear, document driven development methods that were conspicuously unsuccessful. ISO were unable to cite any evidence or experience to justify their approach.

Defenders of the standard, and some neutrals, have argued that critics must examine the detailed content of the standard, which is extremely expensive to purchase, in order to provide meaningful criticism. However, this defence is misconceived because the standard itself is misconceived. The standard’s stated purpose, “is to define an internationally agreed set of standards for software testing that can be used by any organization when performing any form of software testing”. If ISO believes that a linear, prescriptive standard like ISO 29119 will apply to “any form of software testing” we can refer to Cynefin and say that they are wrong; we can say so confidently knowing that our stance is backed by reputable science and theory. ISO is attempting to introduce a practice that might, sometimes at best, be appropriate for the Obvious domain into the Complicated and Complex domains where it is wildly unsuitable and damaging. ISO is wrong a priori.

The Wikipedia article is worth checking out, not least because Dave Snowden keeps an eye on it. This short video presented by Dave is also helpful. 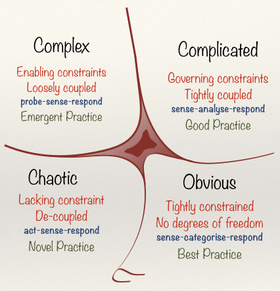 The Cynefin Framework might look like a quadrant, but it isn’t. It is a collection of five domains that are distinct and clearly defined in principle, but which blur into one another in practice.

In addition to the four domains that look like the cells of a quadrant there is a fifth, in the middle, called Disorder, and this one is crucial to an understanding of the framework and its significance.

Cynefin is not a categorisation model, as would be implied if it were a simple matrix. It is not a matter of dropping data into the framework then cracking on with the work. Cynefin is a framework that is designed to help us make sense of what confronts us, to give us a better understanding of our situation and the approaches that we should take.

The first domain is Obvious, in which there are clear and predictable causes and effects. The second is Complicated, which also has definite causes and effects, but where the connections are not so obvious; expert knowledge and judgement is required.

The third is Complex, where there is no clear cause and effect. We might be able to discern it with hindsight, but that knowledge doesn’t allow us to predict what will happen next; the system adapts continually. Dave Snowden and Mary Boone used a key phrase in their Harvard Business Review article about Cynefin.

”Hindsight does not lead to foresight because the external conditions and systems constantly change.”

The fourth domain is Chaotic. Here, urgent action rather than reflective analysis, is required. The participants must act, sense feedback and respond. Complex situations might be suited to safe probing, which can teach us more about the problem, but such probing is a luxury in the Chaotic domain.

The appropriate responses in all four of these domains are different. In Obvious, the categories are clearly defined, one simply chooses the right one, and that provides the right route to follow. Best practices are appropriate here.

In the Complicated domain there is no single, right category to choose. There could be several valid options, but an expert can select a good route. There are various good practices, but the idea of a single best practice is misconceived.

In the Complex domain it is essential to probe the problem and learn by trial and error. The practices we might follow will emerge from that learning. In Chaos as I mentioned, we simply have to start with action, firefighting to stop the situation getting worse. It is helpful to remember that, instead of the everyday definition, chaos in Cynefin terms refer to the concept in physics. Here chaos refers to a system that it is so dynamic that minor variations in initial conditions lead to outcomes so dramatically divergent that the system is unpredictable. In some circumstances it makes sense to make a deliberate and temporary move into Chaos to learn new practice. That would require removing constraints and the connections that impose some sort of order.

The fifth domain is that of Disorder, in the middle of the diagram. This is the default position in a sense. It’s where we find ourselves when we don’t know which domain we should really be in. It’s therefore the normal starting point. The great danger is that we don’t choose the appropriate domain, but simply opt for the one that fits our instincts or our training, or that is aligned with the organisation’s traditions and culture, regardless of the reality.

The different domains have blurred edges. In any context there might be elements that fit into different domains if they are looked at independently. That isn’t a flaw with Cynefin. It merely reflects reality. As I said, Cynefin is not a neat categorisation model. It is intended to help us make sense of what we face. If reality is messy and blurred then there’s no point trying to force it into a straitjacket.

Many projects will have elements that are Obvious, that deal with a problem that is well understood, that we have dealt with before and whose solution is familiar and predictable. However, these are not the parts of a project that should shape the approach we take. The parts where the potential value, and the risk, lie are where we are dealing with something we have not done before. Liz Keogh has given many talks and written some very good blogs and articles about applying Cynefin to software development. Check out her work. This video is a good starter.

The boundaries between the domains are therefore fuzzy, but there is one boundary that is fundamentally different from the others; the border between Obvious and Chaotic. This is not really a boundary at all. It is more of a cliff. If you move from Obvious to Chaotic you don’t glide smoothly into a subtly changing landscape. You fall off the cliff.

Within the Obvious domain the area approaching the cliff is the complacent zone. Here, we think we are working in a neat, ordered environment and “we believe our own myths” as Snowden puts it in the video above. The reality is quite different and we are caught totally unaware when we hit a crisis and plunge off the cliff into chaos.

That was a quick skim through Cynefin. However, you shouldn’t think of it as being a static framework. If you are going to apply it usefully you have to understand the dynamics of the framework, and I will return to that in part two.