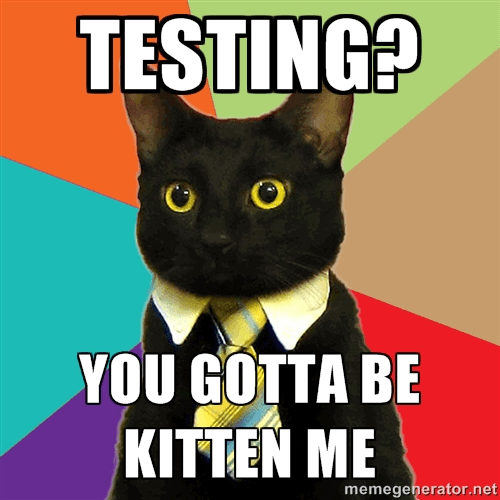 In my last post I took a look at some software testing definitions provided by the ISTQB. In that post I stated I did not think there was such a thing as static testing, which has sparked some debate so let’s dive a little deeper.

It’s defined by the ISTQB as:

The Wikipedia entry for static testing redirects to Static Program Analysis which falls more in line with how I would describe it.

In Cem Kaners’ response to the Stack Overflow question on Why do some consider static analysis testing and others do not? explains that it depends on your definition of testing and provides two examples.

Consider other descriptors here that follow the same pattern: Performance Testing, Security Testing, Acceptance Testing, etc. None of these terms change the context of the system under test the way that static testing does. Static testing shifts the focus to artifacts related to the running software.

Kaner then gives his definition of testing at the time:

Even under this definition, he says it depends, but to quote him:

That sentiment pretty much sums up my feelings on static testing, but since it depends on the definition of testing lets take a look…

The process consisting of all lifecycle activities, both static and dynamic, concerned with planning, preparation and evaluation of software products and related work products to determine that they satisfy specified requirements, to demonstrate that they are fit for purpose and to detect defects.

It’s been pointed out to me that the ISTQB has some definite credibility issues in testing community, so I don’t want to beat a dead horse but that definition reads like an after thought to wrap other concepts instead of being the primary concern.

Testing is the process of evaluating a product by learning about it through exploration and experimentation, which includes to some degree: questioning, study, modeling, observation, inference, etc.

Let’s contrast that with checking:

The process of making evaluations by applying algorithmic decision rules to specific observations of a product.

Checking is a process that can, in principle be performed by a tool instead of a human, whereas testing can only be supported by tools.

Testing is an open-ended investigation– think “Sherlock Holmes”– whereas checking is short for “fact checking” and focuses on specific facts and rules related to those facts.

Testing is, in part, the process of finding out whether our checks have been good enough.

Bolton is also quoted in the Bach posts which describes my reaction to static testing:

These definitions do a much better job of describing testing, and as tester they resonate with my experience. But consider this you could change the word evaluate to write or codify in testing definition and you end up with an apt description of a software developer. After years of tension between testers and developers is the line that thin?

Static testing frequently occurs as a developer writes their code. Developers are evaluating requirements, specifications, reference material and investigating until the code is checked in that process isn’t completed and is open-ended. Along the way they may create unit tests to help confirm and define their findings, this then adds dynamic testing into the mix. The process may even repeat as code maybe formally or programmatically reviewed, and/or integration tests are written to test component interactions. This isn’t a new revelation, Michael Bolton describes this (better) in the Testing vs. Checking Is A Leaky Abstraction segment in Testing vs. Checking.

By definition developers are both static and dynamic testers, which essentially covers the fully defined test spectrum. Let that fry your synapses as you think about it. Using those definitions, I can see how managers and developers could infer they do not need to hire a person with the dedicated role of testing.

Maybe the real problem is that the terms testing and tester are both too general and too confining. I think I’ll start referring to myself as a developer of quality, and if questioned explain testing is just a part of my process…