Getting Out of Here 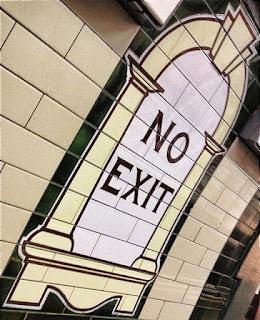 Some of the testers from Linguamatics went to Cambridge Escape Rooms yesterday. Why? This is from their FAQ:

You are locked in a room … and have to solve a series of puzzles and mysteries to escape. You will have to search high and low for clues and work together … You have 60 minutes to escape using only the power of your brain..

Some things that I liked: we talked to each other a lot, we explored, we naturally split up when there was work to do in parallel, we came together when we were stuck, we switched roles and tasks when we were getting nowhere, we paired and changed pairs, we checked each others’ conclusions, we were open to being checked (and sometimes we found new insight, made progress, in the checking), we generated and tested hypotheses, we explored solutions, we challenged each other and ourselves, we were open to being challenged, we repeatedly found another approach when the one we were using wasn’t working, we made connections, we used tools that we found and carried them with us in case they were useful again (and some were), we were distracted by red herrings,  we were exhilarated by the intellectual side for its own sake.

So, yes, I think it overlaps in interesting ways with things that we do in our day jobs. That’s what I hoped for when I booked it up.

But there are things that don’t align, and they are interesting to me too. Here’s one: there’s direct physical contact with the objects in the rooms that you don’t get when you’re testing software. At work, all interaction with the thing we’re testing is mediated by some other tool, or more usually a tall stack of tools such as the hardware, firmware, OS, libraries, a runtime, the software, the software’s API, the UI of the application talking to the API …

The directness with which I could do those things, the intuitive way that I felt like I was doing them, and observing that I was doing them was intriguing. In some way I was a physical metaphor for my mental processes. And vice versa. And they were feeding off each other. I wonder whether I can do more physical things at work to help with the mental side of my job?

Amateur philosophy aside, we had a blast and I’d recommend it as a team-building exercise, a teamwork exercise and an intellectual exercise.
Image: https://flic.kr/p/ecYfJE