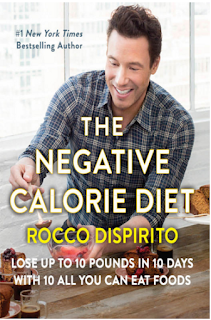 All right, I confess. The title lured me in. With parts incredulity and general curiosity, I decided I had to see what this was all about. Was it just some slick marketing, or if there was something of substance to this claim?

Rocco DiSpirito is a celebrity chef, and has appeared in a number of media outlets over the past decade plus. I have heard him on Kara Rota’s “Clever Cookstr” podcast. It was the most recent episode, in fact that covered “The Negative Calorie Diet” that finally made me say “all right, I’m curious, what is the premise and what is on offer with this?” (I’m reviewing the Kindle version of this book, just in case anyone is curious).

First things first, what in the world is a “negative calorie diet”? That doesn’t make any sense on the surface, and in truth, there really isn’t a truly “negative” food, is there? What is DiSpirito driving at here? Turns out that what he is really emphasizing is eating whole, unprocessed foods that, when taken in and metabolized, the net effect is that your body, on balance, works harder to digest them than the nutrient content provides. DiSpirito identifies three aspects to foods that make them “negative calorie foods”.

Whole foods rather than processed foods

The idea here is that whole, unprocessed or very lightly processed foods contain more fiber and denser nutrient profiles as compared to processed foods. The density of the nutrient profile, as well as the inclusion of cellulose, bran, germ and other components of a whole food diet means your body has to work harder to process and break down the food consumed than the total calories that food provides. This sounds a little far fetched, but I’ve actually seen this in action, especially when I buy bulk vegetables like cauliflower, broccoli and carrots. There’s a lot of volume to make two hundred calories of these vegetables, with fiber and water making up a large percentage.

Here the idea follows the thought that certain foods provide a low level “work load” in your body, and by the virtue of that consistent work load, it is priming the body for fat burning. DiSpirito points out that certain foods like cruciferous vegetables and protein have a “thermic effect”, in that your body works harder to break down these foods, and in the process, requires more fuel to do its work. Granted, the workload is not on the same scale as, say, a strenuous weightlifting session or high intensity training activities, but it’s not insignificant, either. By leveraging this thermic property of certain foods, the net result can be more calories burned than consumed.

Skeptic hat firmly on, here’s where I think a large part of this “diet” really comes into play. By focusing on whole, unprocessed foods, we are taking them in in their least broken down state. Whole oranges are going to take up more room in our stomach than orange juice. Fiber and water take up space. Proteins and fats have the ability to let our brain know that we have some dense stuff to work through. In short, we get full on items that take up space, rather than consuming small, concentrated convenience foods that may taste good, but are largely concentrated, small volume items that pack in a lot of calories but offer little in the way of satiation. In certain circumstances, that’s fine. When I go on a backpack trip, I personally love having calorically dense foods in very small and light containers. Less to carry and more fuel for the pound, but that’s not what I do, or should do, every day. In most cases, allowing myself to be filled by whole foods, chased with water in most cases, I should find myself in situations where I am not hungry, I am full and satisfied with my meals, and ultimately, my body is burning more energy working through the food I am eating than I am actually consuming.

“The Negative Calorie Diet” is split into three sections.

Part One talks about the Negative Calorie Diet concepts, and describes the philosophy behind the diet (much of which is explained in the three points above) and highlighting foods that help reach the goals DiSpirito sets out. It then goes into a thirty day “course” the reader can choose to take to get results from the diet as described. The first ten days are described as a “cleanse”. Skeptic hat back on; I tend to think of the notion of “detox” to be food quackery, but as it is termed here, it’s really more an adjustment of the food items consumed, and for the first ten days, it leverages eating via smoothies, soups and salads. In other words, we are aiming to up the intake of a lot of food items we may not already be consuming. In that light, I’m OK with the process. The next twenty days goes into preparing three meals and one snack each day, with the goal of not worrying about portion or calorie count. It may sound like DiSpirito is saying you an eat as much as you want of these foods, and in a way, that’s true, but really, what’s going on is that you will likely find yourself full before the size of the caloric payload will be of much concern. This section also provides shopping lists for the items recommended for each of the days in question, as well as links to the recipes in the book for each meal.

Part Two covers the Negative Diet Recipes. For many, this may be all you are really interested in. To that end, there are indeed a lot of options.

Chapter 6 is all about Smoothies, fifteen to be specific, with tastes ranging everywhere from fruits to vegetables to a Virgin Mary smoothie for good measure (memories of “Tuna Shake, Baby!” are going through my head right now from years on the misc.fitness.weights newsgroup in the 1990s, but this is a little different 😉 ).

Chapter 8 covers Soups and Salads. Fifteen options are available here, and an emphasis is placed on variety, fresh ingredients, and a judicious use of spices. There are options for omnivores as well as vegetarians and vegans.

Chapter 9 goes into Mains, and provides seventeen entrees that, again, cover a broad variety of cuisine styles, ingredients, and dietary goals. Various cuts of meat, seafood, vegetables, fruits and spices make their way into these recipes, and again, there’s sure to be something to please just about everyone.

Chapter 10 brings us to the topic of Snacks. Yes, snacks are encouraged, as long as you are the one making them and they use the foods recommended to reach the negative calorie goals. Eight unique ideas ranging from homemade cucumber and almond sushi, red ants on a log (which is really celery stalks, peanut butter and cranberries, which frankly works fine for me 🙂 ),  to making your own granola bars.

Chapter 11 is Desserts. Yep, desserts. We all crave sweets, so rather than deny us the pleasure, DiSpirito has developed options that let us enjoy them, albeit with some modifications. Almond cake, crepes suzette, citrus and berry bowls wi
th whipped topping, no need to deny your sweet toth while pursuing this course.

Part Three focuses on The Negative Calorie Lifestyle. DiSpirito’s aim is to encourage healthy eating for the long haul, and to that end, he makes a number of suggestions. Go meatless, or barring that, use meat sparingly and up your intake of fresh fruits and vegetables. Encourage your family to participate in this approach with you. To this end I am painfully aware that it is much harder to eat when you are preparing your food separate from the rest of the family. Getting everyone on board makes for a big boost in the likelihood the habits you develop will stick. Eating Out and On the Go need not be a black hole of unhealthy food or limited options, but it helps to be forewarned and forearmed, and DiSpirito devotes a chapter to suggested approaches for a variety of restaurants and cuisine styles. The last chapter focuses on Maintenance, and helping you keep to the habits while losing weight, and in that approach, keeping the weight off.

The title is a bit gimmicky, but the concept DiSpirito is describing does make sense, and I’ve used variations of it myself over the past seven months as I have lost close to 70 pounds. It is entirely possible to expend more energy than we consume, and that ultimately helps us develop a deficit so that we lose weight. The ideas in “the Negative Calorie Diet” do indeed meet that goal, both through nutrient quality and variety, as well as nutrient density, including insoluble fiber and water. If I have to offer a criticism, it’s that there are a lot of terms and studies thrown around in the sections setting up the first part of the book, but no references to those studies. Granted, this is a cookbook, so that may be overkill, but I would think that, at least, a list of studies as an Appendix would be a huge plus. Yes, we live in the era of Google and the ability to search, but some more clarity on where these terms came from and the basis for making the claims would have been nice.

Even if you are not interested in going all out and living a “Negative calorie lifestyle” but want to see how to create some interesting whole food options, and perhaps try some things you’ve never had before that would taste great and also be overall healthy, there is much to like here.