What Do I Know? 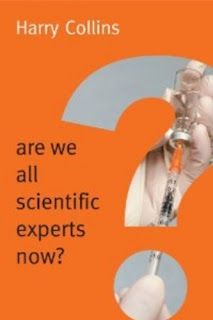 My kids begged to go to the Funky Fun House this half-term. I’ve got nothing against these soft play barns particularly – I’ve been to stacks of them – but, for me, there’s generally little that’s funky about echoing industrial spaces crammed with primary-coloured foam, covered in crumbs and reeking of decades worth of half-eaten fish and chips.

To be fair, though, this one is in a (ware)house and the girls do have a lot of fun. In fact, I used to have fun too when they wanted me to play on the thing with them. These days they just see me as the shoe and coat monitor and provider of snacks. (Oh, and somone to take the mickey out of in front of their friends.)

And that’s how it went down this time too, except that I was engrossed in a book called Are We All Scientific Experts Now? by Harry Collins. A book I read in its entirety at my sticky table, that blocked out the noise of the toddlers in the padded prison enclosure that I’d ended up sitting next to; that insulated me from the random draughts of hyper-accelerated cold, cold air that was injected from somewhere behind me into the sweaty fug whenever some sensor thought it necessary, and whose trajectory I seemed to be on; and that even made me smile benevolently as I chucked back the plastic balls to whichever tiny terror had lobbed them at me from an unexpected direction.

This is a great book.

Collins describes three “waves” of our understanding of how science operates coming out of a discipline called Science Studies. At a simple level, in the first wave scientists were perceived to be engaged in tests of nature and able to pronounce on the facts and foibles of it, uncontested. The white coat was enough to convince the public that good work was being done in a trustworthy, honourable and correct manner.

In the second wave, it was realised that the story is more complex and that experimenting on nature can have an effect on nature. The subject of the experiment is not constant or consistent, and the experimenters are part of its context not removed from it. They are human and can have bias and opinion and motivations outside of the “first wave” view of science. Scientific scandals emerged and the public began to lose faith in scientists. The third wave, ongoing now, is to find a way to “treat science as special without telling fairy stories about it”.

The book provides an exploration of what it means to be an expert, and a rejection of the idea that Collins terms default expertise: that these days, in our society, anyone can be considered an expert in pretty much anything. It includes a taxonomy of expertise that seeks to provide a basis on which to explain the difference between those people who can talk lucidly, broadly, deeply – seemingly expertly – about a subject and those people who are on the inside of the subject, in the milieu of it, actively engaged in the community of it, with access to its unwritten contexts, its tacit knowledge.

He terms these two classes ubiquitous expertise and specialist expertise and notes that it can be hard for outsiders to tell the difference between them. And he has a lovely turn of phrase for the way that, to those outsiders, complexities around an issue can be elided, doubt can be replaced by certainty and rough edges magically smoothed away: “distance lends enchantment”.

The conclusion of the book is that we all have a level of (ubiquitous) expertise in some areas with which we are implicitly engaged through our daily lives – we can all speak our native language or drive a car – and we all have some measure of (specialist) expertise in some areas that we choose – such as our day jobs. But these kinds of expertise do not generally equip us, of themselves, to be scientific experts. We can become scientific experts, but it takes a lot of hard work; there is no substitute for effort and engagement with the scientific community.

We do not even necessarily possess the skills to distinguish between competing (apparent) scientific experts with any reliability. And if we think that we do,  if we accept the views of others with similar lack of scientific expertise as if it was backed by scientific expertise, then society will be the worse for it because, despite being staffed by humans, and thus flawed in the ways that humans are flawed, the ethos and methodology of science should be lauded and respected.
Image: Amazon

Edit: I wrote about a related lecture in Quality is Value-Value to Somebody.