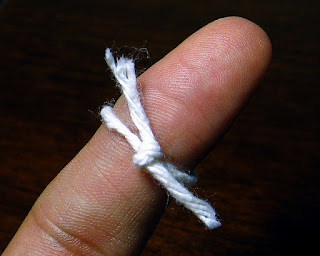 Years ago I chucked a faulty video recorder and bought a cheap and compact PC to use as a PVR. (I run MythTV on Ubuntu, for those interested in such things.) Because me and Mrs Thomas don’t watch telly that much, and record less, and because we’re interested in not wasting electricity, we only have the box on when we’re watching something on it or when we’ve scheduled something to record.

Of course, sometimes that means that we have to remember to leave it on. And we kept forgetting. But being a problem-solver, and interested in proportionate solutions, I implemented a quick fix. In fact it was more an initial trial, just a simple little sign that we stick next to the telly. It says VIDEO and has served us so well that we found no need for anything more sophisticated.
Until now. Our kids have come along and control the telly, operate the computer and so on. We’re helping them to become interested in not wasting electricity too, and so their habit is to turn appliances off when they’re done with them.
Do you see where this is going?
The word video means little to them. If it’s anything at all it’s something they watch on YouTube and nothing to do with recording, although it’s not as alien as when I talk about taping something… And so our sign doesn’t work any more; the girls just keep turning everything off as we have asked them to. Explaining carefully to them what the sign means, many times, hasn’t helped.
Being a problem-solver, and aware that solutions can date and the problems they address can shift, and interested in meta-aspects of problem solving, I took a step back. Was I looking at this in the right way? What was really the problem here today? And whose problem is it?
The answers? Simply: No. The sign. Mine.
And so I’ve changed the sign. It now says Please don’t turn the computer off.
Image: https://flic.kr/p/drNBvr