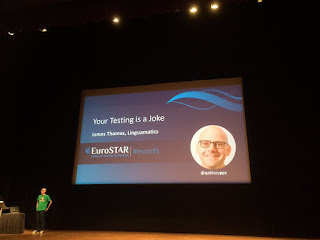 My face rests just north of miserable. (In a previous blog post I once called it the growler.) Sadly for me, from that starting point just a little puzzlement, thought, irritation or even too much milk in my tea can turn it into an apparent mask of rage. I usually remain blissfully unaware at the time, despite the fact that friends, family and colleagues have all told me about it.

Given this, you might think it ironic that my EuroSTAR 2015 talk was about making people laugh, about the analogy I perceive between joke-making and testing and how I exercise my testing muscles when I’m not testing by exploratory joking. Or perhaps that simply makes you chuckle.

I enjoyed presenting, was delighted with the reaction, and then a little surprised to find myself instinctively asking everyone who spoke to me afterwards whether they felt there was something practical that they could take from it.

Dour? For sure, but also a doer.
Image: Twitter