The Antics in Semantics 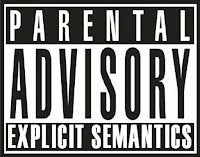 In his EuroSTAR 2015 talk, Iain McCowatt described an ongoing project which involves establishing testing principles for his teams, across projects. In a large organisation in a heavily-regulated environment such as his, this is a really significant challenge, but he described an interesting, pragmatic approach based on Simon Sinek’s Golden Circle.

While discussing the principles that he and his team arrived at, he said something slowly and with great emphasis:

We really sweated the semantics.

The principles are important. They are directly tied to and defined to support the purpose of testing for his company. They are the foundation for all decisions that will be made about testing in the company. As you might expect given this, he was careful to also define what he means by a principle. For the record, this is it:

Principles are heuristics and shared values that guide our thinking about how to test and organize our testing.

I enjoyed Michael Bolton‘s talk, No More Exploratory Testing, as a story about the evolution of the semantics of some terms in our field (terms like checking, testing, ad hoc testing, exploratory testing) and how this evolution is intimately tied up with other factors such as changing context, new thinking, the recognition that the terms don’t suit their intended purpose or are inconsistent with the use to which they are being put.

Bolton is big enough to note times at which he has helped (in retrospect) to make things worse (although in a well-intentioned quest to make things better) for instance by supporting the term ‘sapient testing’ which was widely misinterpreted to oppose ‘non-sapient’ or ‘stupid’ testing. And he arrives at an interesting conclusion: defining the terminology he wants to use in the way he wants to use it within a Rapid Software Testing namespace.

These two talks recognise a problem that Humpty Dumpty saw a long time ago: words can mean whatever you want them to mean. They both resolve the problem by (a) being careful to define the terms that matter to them as well as they can given their current understanding and context and (b) making a safe place to use that terminology in that way.

This approach is reasonable, sensible and practical and I’ve enjoyed mulling it over since. Here’s a few thoughts:

Neither speaker refuses the right of others to use other terminology or the same terminology in different ways. Indeed, I perceive that both are prepared to make efforts to understand the terminology of others, even when they find strong reasons to object to it or the motivation for it. Evidence for this was seen in their questions at the session Stuart Reid and Anne Mette Hass lead on ISO 29119 at the conference.

There are risks to (being seen to be) setting up a walled garden. For example, that insiders will feel smug and become less inquisitive about the outside or that others will feel excluded, will ignore or reject it in its entirety, will begin some other process designed to be different for the sake of being different.

Neither speaker claims, as I see it, that their terminologies are correct, complete, static. I imagine they’d be happy to describe them as something like working definitions – the best they have given the context, experience, evidence and so on.

You might think that this stuff is theoretical nonsense; intellectual chin-stroking; deckchairs on the Titanic; fiddling while Rome burns. You might just want to get on and test. And that’s your prerogative – and sometimes it’s also the right thing to do – but I find that meaning matters massively and dealing with that is one of the hardest problems in testing because it is present to some extent in every single interaction you have with any person via any medium.

And, for me, that includes myself and my own mind.
Image: https://flic.kr/p/6nuBHD

Edit: Iain has now blogged about his EuroSTAR talk.