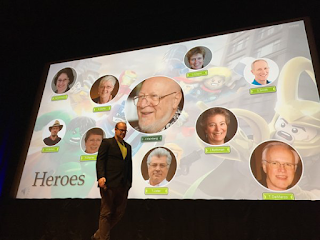 Jerry Weinberg oozed out of many of the talks at EuroSTAR 2015. He was most visible as the hero at the heart of Kristoffer Nordstrom‘s keynote but numerous other talks that I attended and conversations that I had directly or indirectly, knowingly or unknowingly, as quote or in spirit offered some variant of this famous line:

No matter what the problem is, it’s always a people problem.

The observation that in testing we need to remember that we deal with people was a seam running through the the conference. A seam from which value can be extracted. A seam containing testing ore. And probably also testing lore, shared around by these speakers, these self-declared conversationalists, coffee cup evangelists, shoe leatherers.

These kinds of testers do not view testing as just being heads-down in the product trying to break things (as valuable as that can be). They are out and talking to people, they are recognising (actual or potential) problems outside of the software that impact adversely on the software and taking action – person-to-person action – to reduce or remove that impact.