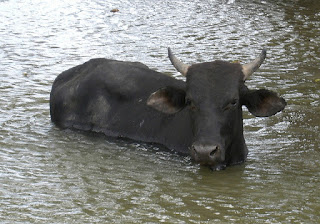 I’ve had a nice reaction to Only Kidding, a post about how I try to help my kids experience wonder, take control and look for scope in the world around them. So here’s something else that we’ve been doing recently which I like to think is fun, thought-provoking and stimulates creative problem solving.

I’ve got a problem; I’m on one side of the river and all my toys are on the other. I want to get to my toys … but the only thing I’ve got to help me is food.

And then it’s on them to come up with suggestions. Answers to that one included:

We’ve established a few conventions as we’ve played, for example it’s not allowed to use containers in the solutions – so a chair made out of tins of baked beans was rejected in one game. We’ve also built up some solution libraries – so if a sheet of material is required it’s taken as read that it can be knitted out of spaghetti using, say, celery as needles.

Plausibility is important but not fundamental – so, a breadstick raft seems to be acceptable because it could in principle float even if in practice using chocolate spread as adhesive is impractical. Out-and-out fantasy – such as making a helicopter out of butter – is always shouted down.

Sometimes I’ll provoke things by offering a new perspective such as getting a cow to swim across the river and riding on its back. And then we’re onto questions: Is a cow food? Is a live cow food? Is a cow a container of food?

I really love this stuff. (And thankfully, at the moment, so do they.)
Image: https://flic.kr/p/auxFK