How Microsoft blew our minds at Build 2015

Here we are again. After a little detour to QCon San Francisco and New Yorkin 2013 and 2014, we thought it to be about time to rejoin our fellow Microsoft developers here at Microsoft Build 2015 at the Moscone Center in San Francisco. Since we couldn’t get a direct flight from Amsterdam to San Francisco, we had no choice to travel over Los Angeles and take a 2015 Mustang Convertible along the Pacific Coastal Highway. Oh well, being a professional isn’t always fun.  Compared to QCon, which usually has about 500-600 attendees, Build is huge. We didn’t get any official head count yet, but my guess is that we’re amongst 2000-2500 geeks here.
After a healthy breakfast of croissants and other pastries (guys…give us some yogurts), we queued up with those thousand others for the keynote. I’m pretty sure nobody really cares about the keynote itself. Most people just like to know what gadget they’ll get this year. I’m not saying I wasn’t interested in that, but what really blew my mind this year is how Microsoft managed to embrace the things this profession really cares about.
For instance, the number of features that Azure gained over the last year or so is staggering. Look at Docker for example. They showed us an ASP.NET 5 application that was hosted in a Docker container on Windows Server which got Docker support recently, and then switched to Ubuntu to run that same application on Linux. Even better, they demonstrated a remote debugging session from inside Visual Studio connecting to that Docker container on Linux. It’s so surreal to hear terms like Docker, Linux, Android, cross-platform and Windows being intermingled on a Microsoft conference. 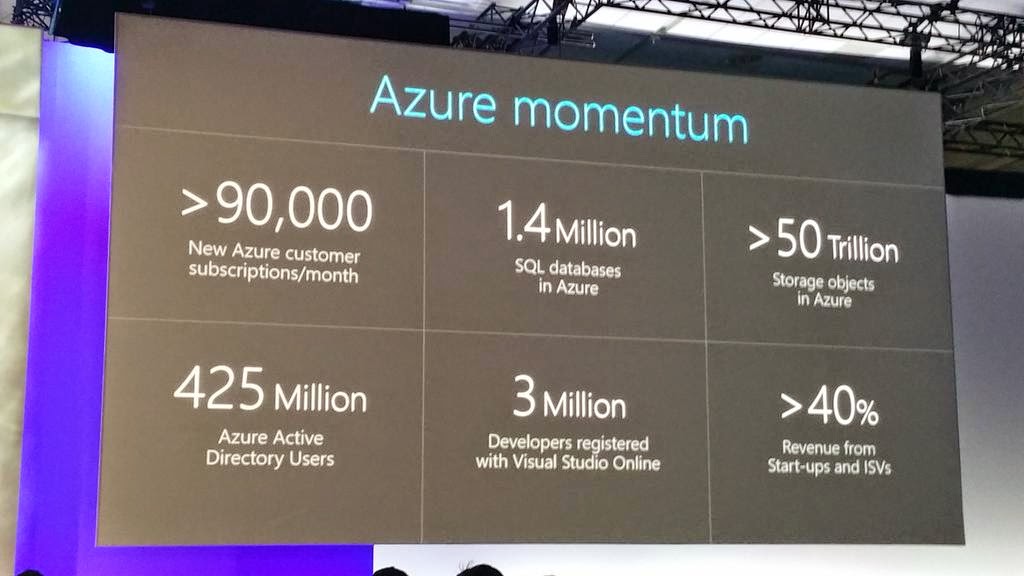 Other noticeable features of Azure include elastic database pooling using dynamic scaling and sizing by employing Machine Learning. But the mobile telemetry pages provided by the Azure Portal are also pretty impressive. It’s like AppDynamics / NewRelic, but then for Windows Phone, Android and iOS. And then there was something called Logic Apps, a very cool cloud-based workflow platform for visually designing business orchestrations where your own (Swagger-enabled) services as well as external parties can be connected together. It’s a bit like FFFT or Zapier, but then integrated in the Azure ecosystem.
This entire cross-platform mentality was visible everywhere. Even custom-build add-ons for the next version of Office work everywhere. Whether you run Office on Windows, use Office Online or use the iPad version, it’ll work the same everywhere. And think of it, they actually demonstrated an iPad on stage…on Microsoft Build. And now that I mention it, and what really reinforced this mentality, was the announcement of Visual Studio Code, a fully functional IDE for MacOS and Linux, including debugging, IntelliSense and rich refactoring features, all available now!
But, they made sure not to forget the Windows platform itself, and do what it takes to make Windows 10 a big success. For instance, web sites can now be amended with rich Windows 10 integration and then distributed through the Windows Store. The same goes for ‘traditional’ Win32 and .NET applications. You can package them up, distribute them through the Store and get the same install/uninstall experience you get with those modernapps. And it must really work, because they showed off Adobe Photoshop as a Windows Store app.
So on one hand, they actively embrace the other platforms, but on the other hand they try to convince the developers for those same platforms to join the Windows 10 eco-system. How? By allowing them to compile an existing Java/C++ for Android app into a Windows 10 app from inside Visual Studio! And they don’t have to, but they can easily enhance that app to get better integration with Windows 10. Now wait, that’s not all. You can similarly compile Objective-C apps and games as well. That sure will solve the app store gap that Windows Phone has been suffering from. Oh, and did I mention that Microsoft’s new browser, now officially called Microsoft Edge, supports converting FireFox and Chrome add-ons with ease?
In a way, you can say Microsoft has declared Google and Apple its friends and moved its guns towards Amazon. I call that a significant improvement…