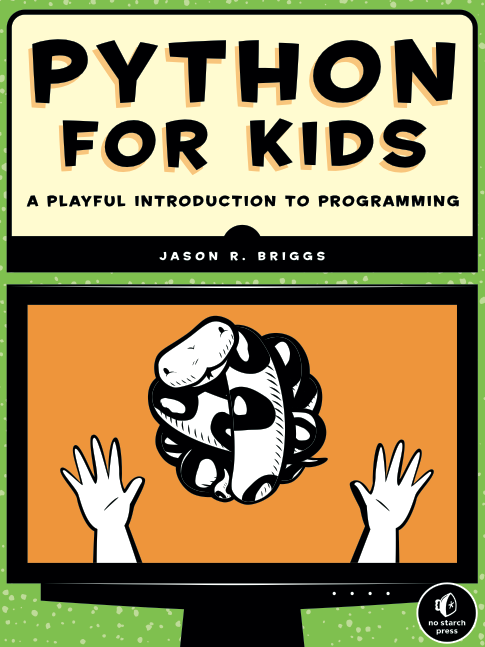 As I have been working with my daughter to learn programming, we have been focusing on learning Python.  We chose Python primarily because it was something I felt we could both come at from a similar frame of reference. I had worked with Python but in limited capacity, and Amber had not really worked with any programming languages. By working on Python, we could be somewhat closely matched with what we were learning.

NoStarch Press has a number of books that are ideally suited for younger programmers, and to that end we both decided to look at the books together. We will be doing three “for Kids” books reviews during February, provided we can get through all of them. All journeys have to start somewhere though, and this journey will start with Python for Kids. I should also mention that, for a limited time, you can get Python for Kids as part of the NoStarch and Humble Bundle “Humble Brainiac Book Bundle” offer, which comes with a lot of other additional books.

Python for Kids is written in a way that lets the user, whether they are kids or adults, readily get into the material and see how the examples work and try them out for themselves.

Chapter 1 starts out with installing and using Python 3, so right away Amber and I had to adjust to the new syntax (Codecademy’s Python modules are still based on Python 2).  Be aware that there are some subtle differences with Python 3, one of the main ones being the parentheses required when using the print(“text goes here”) function (yeah, like that 😉 ).

Chapter 2 introduces the user to calculate values using simple equations via operators, using parentheses to ensure the desired order of operations, and creating and using variables to store values for use in those calculations.

Chapter 3 introduces strings, lists,  tuples, and maps, each of which allows the user to manipulate text in a variety of ways. Each of the approaches has rules as to how to move items and how they are represented, ranging from simple strings with are just quoted sentences, up to maps which have keys and values that can be called as needed.

Chapter 4 introduces the user to drawing methods, and in this case, that involves using a module called turtle (which in turn uses a tool called tinter). Using this tool, we can actually draw the turtles movements with lines moving left and right, moving forward and backward, as well as starting and stopping with up and down commands.

Chapter 5 focuses on asking questions and responding based on the response the system gets. For experienced programs, this i about if statements and their related commands (elif, else)  and how commands allow for combining conditions (using and/or) and converting values (using int, str, float and none).

Chapter 6 talks about “Going Loopy” which, as you might guess, deals with handling loop conditions and repetitive tasks. for and while loops are covered, and break conditions are shown to, well, break out of loops.

Chapter 7 talks about ways to recycle code and reuse it defining and using Functions and importing Modules. Variable scope is also covered so as to see where values are assigned, used and passed back and forth.

Chapter 8 focuses on the things in python, otherwise known as classes and objects.  this chapter covered the details of classes and how they an be used to create instances, and how objects can be created, call functions to work with objects, and assigning object variables to save values in those objects.

Chapter 9 covers the various built-in functions available in Python, those that we can import into Python programs and use directly (functions like abs, bool, print, float, int, len, etc) as well as howe to open and manipulate files.

Chapter 10 covers a variety of helpful modules, such as copy, keyword, random, shuffle, and the sys module that allows the user to control the Python shell itself, reading input with stdin, writing output with stdout, telling time with the time module, and using pickle to save user information in files (yes, there’s a module called pickle 😉 ).

Chapter 11 revisits turtle, and how we can use it to draw a variety of items. including basic geometric shapes, changing the pen color, filling shapes and reusing steps in functions to combine drawing shapes and using multiple colors in one function call.

Chapter 12 covered using tkinter to make “better graphics” and my oh my does this take me back. I used Tcl/Tk back in the 90s for a number of things, and the syntax to use tkinter is very familiar.  Simple shapes, event bindings so objects can move when keys are pressed, using identifying numbers to move shapes and change colors are all covered here.

Part II gives the user a chance top practice the programming chops they have developed in the first Part by making a ball bouncing game called, appropriately enough, Bounce!

Chapter 13 starts out using the tinter module, in which we can create a class for a ball and move it around the screen.  Coordinates can be set so that it will bounce off of the top and corners of the screen, and a randomized option so the ball has a dynamic movement.

Chapter 14 continues with creating classes for the paddle, and using coordinates to see if the ball hit the paddle. Event bindings tie the left and right arrow keys to control the  paddle,  and make it so,  if the player misses the ball, the game ends when the ball hits the bottom.

Part III continues the ideas so far shown with “Mr. Stick Man Races for the Exit”.

Chapter 15 shows how to make graphical images of, you guessed it, a stick man (using GIMP to make the actual images) and making the backgrounds of the images transparent so they won’t cover up other things.

Chapter 16 covers creating a Game class making a background image. By using functions called within_x and within_y, we can determine if items have collided with other items. We also discover Sprites and a sub-class, PlatformSprite, to draw the platforms on the screen.

Chapter 17 walks through the details for taking the pictures we created for Mr. Stick Man back in Chapter 15 and setting up options for the figure to move, turn and jump.

Chapter 18 finishes off the Stick Man game, and shows that putting together a working game is not trivial, but it’s also not a huge endeavor either.  We focus on using the images we made for Mr. Stick Man so he appears to be running, use  collision detection to tell if he hits the sides of the canvas or another object, and have Mr. Stick man drop if he runs off the edge of a platform. We also make a door that Mr. stick man can go through, ending the game.

The book also provides an Afterward that discusses some additional options for doing basic game development Alice, Scratch and Unity3D, PyGame, which is a dedicated library for making games, band a discussion of other programming languages and a super quick look at what they do , where to get them, and what it takes to make a   “Hello, World!” program. The Appendix highlights keywords in Python, and the glossary defines a number of words kids might not hear in their everyday interactions.

Python for Kids clocks in at a little over 300 pages, but you won’t feel like it
as you work through it. There are numerous small projects and samples to examine, and all of the solutions to the puzzles and challenges are available at http://python-for-kids.com/. While this book is geared towards kids, there’s plenty in here to keep adults engaged and focused. Often, programming books are plagued with the “implied knowledge” trap that happens so often, where small projects give way to bigger ones, without a clear understanding of how the jump was made. Python for Kids does a very good job of avoiding that problem. Having kids as the primary audience, they take their time explaining key areas, and yes, for programmers with a little work under their belts, this is going to probably seem remedial, but as an introduction to Python, I think it’s first rate.

If you are looking to give your kids a kick start in learning how to program, if Python seems like an interesting language to start with, and if you’d like to have a couple of tangible projects to play with and augment as you see fit, then Python for Kids should be on your short list of programming books… provided having fun while learning is a priority.