The So in Absolute 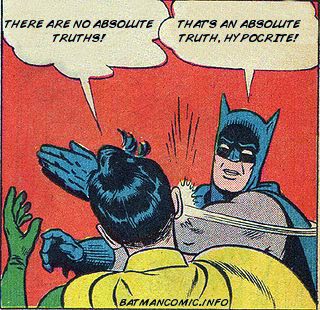 In a job interview once, the candidate said to me

(I didn’t think I could put stress on regression testing as well. It might have sounded like I was shouting.)

The candidate said – after a reasonably lengthy pause – simply

When reporting something as apparently absolute, I want my testers to caveat, to contextualise, to define the scope of the statement

When presented with an unequivocal, absolute, universal statement, I want my testers to be thinking about the ramifications, to be testing it

You’re saying X, so what about …

Well, if I want to stay on the right side of Batman, I want them to do those things so far as it makes sense in their context.

So here’s a bit of seasonal fun: what scenarios can you think of where software doesn’t require regression testing? Be as creative as you like and stuff them into the comments.
Image: https://flic.kr/p/7N8dfY