Don't Know What You've Got Until Someone Tries to Take It

The past three days have been, shall we say, emotional, frustrating,  and wonderful, all at the same time. Most of all it has shown me that a group of vocal people can make a difference, but more on that in a bit.

First, some perspective. Last year, Curtis Stuehrenberg and I, along with Josh Meier, decided it was high time there was a software testing Meetup group in San Francisco. May not sound all that revolutionary, and wait, weren’t their plenty of software testing groups already? Well, yes, if your main focus was on a specific tool. The Selenium Meetup group has been a de-facto testing group for years, and it’s where a lot of software testers go to participate and share in testing topics from time to time, but what we noticed was missing was a focus on the “ilities” of software testing, as well as the areas that go beyond the programming aspects of software (or “paradev” aspects, to borrow from Alister Scott). Thus, we decided to inaugurate the Bay Area Software Testers group, or BAST, as we colloquially refer to it, with the following goals in mind:

The Bay Area Software Test Association originally formed as an impromptu attempt to provide software testers and quality engineers from San Francisco and the East Bay a place to meet and network without having to brave the Silicon Valley traffic snarl. Currently we meet on a monthly basis, providing a chance to hear people talk about general topics and socialize/network/schmooze some of the more interesting people on any software development team …. the testers!

We enjoyed several months of great talks, great conversations, and great activities, and then the summer and fall time frame saw less activity, due to scheduling challenges all of us were dealing with, and just a general challenge to get everyone on the same page. Sometime in this time frame, my Meetup account had been hacked, and I stopped receiving updates. Sad thing is, so much else was going on that I didn’t get a feeling for what was happening until just a few days ago. A post to Twitter, though, definitely got my attention: 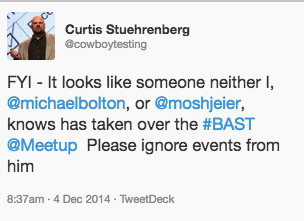 My first reaction was confusion, then bewilderment, then anger. How could someone hijack our group? Well, we discovered how quickly enough. In the interim as we were looking to transition out of the previous payment and registration (which Curtis had held) and to our new payment model (which Josh and SalesForce had offered to help us with) a member of the group jumped in and made the payment for the next year. In the process, they set themselves up as the organizer, effectively blocking us from being able to administer our own group. What followed was a conversation between Curtis, the person who shall remain nameless, and the folks at Meetup. We were, of course, frustrated that this new entity took over the group from us. We were doubly frustrated when they wouldn’t give it back, and we were triply frustrated, and then enraged, when the group started to get spammed with commercial training dates posing as Meetup events.
To add to the frustration, Meetup gave us the standard policy line of “sorry, it’s not up to us, you need to work this out with the new organizer, as they have paid for the group”. It was at this point that Curtis, Josh and I, as well as many other people, went on the offensive and started to look for other options. Would we abandon BAST? Make a new group? Drop Meetup altogether and go to another service (Eventbrite perhaps?). Several people took to the interwebs and started calling out the individual who had hijacked the group, and Eventbrite responded to us publicly and said that, if Meetup couldn’t help us, they’d be happy to help us establish a new home.
This story, I am happy to say, has a happy ending. Due to the pressure and the vocal comments from several members of our broader community (many of which aren’t even in San Francisco), Eventbrite willing to help us make a new home, and our own members posting to the BAST forum that they would not stand for their group being hijacked, and would therefore leave (myself being one who posted a similar comment), Meetup came back to us, allowed us to reinstate Curtis, Josh and myself as organizers, and we were able to deal with the person who hijacked the group and ban them from further participation.
Several lessons came out of this experience, but none more poignant than the fact that we realized we had a great thing, and that it could be take away from us far easier than we ever imagined. Second to that was the fact that we have a great community that cares about what we have created and were wiling to fight on our behalf, not just to say how sorry they were that this was happening, but actually step in and help us resolve it. Third is that people vote with their feet, and if you abuse their trust, you can lose their support very quickly. Fourth, it showed me that we can’t take this group for granted. It needs to be cared for and it needs to be nurtured. To that end, for those who left BAST because of this recent mutiny, and for those who were unhappy with the change of events and chose to abandon ship, we want to let you know that everything is back to normal (perhaps even better than normal) and that Josh, Curtis and I are looking forward to making 2015 an active and involved year of discussion and get togethers. Perhaps we let time and momentum take over, but this recent upheaval showed us all how much this group mattered to us, and we are not going to let such a thing happen again. If you left us, please come back. If you want to help us develop events for 2015, we’d love to hear from you. Most of all, we look forward to getting together to socialize/network/schmooze with some of the more interesting people on any software development team …. the testers ;)!