The last conference day started with a very personal & inspiring (and slideless!) keynote from Antony Marcano, entitled “Don’t Put Me in a Box”. He made a good point about how people have many ‘labels’ outside their job such as mother or father, friend, cook, helpful neighbour etc., while in a job there’s often only one label: The job title. In fact, he asked as few listeners in the audience about what they do and everyone answered with a role or a job title.

He explained how this may be an impediment for agile teams. If (or when) we stay in the box of our job title, we might not get a chance to help in an area that’s outside the main focus of our job description.

The following talk “Pull Requests and Testing Can Be Friends” by Alan Parkinson presented some very interesting points. One of them was this: While it may not be necessary for testers to be able to write code, it may be very useful to be able to read code.

His presentation was mainly how his company uses pull requests in Git. I found it interesting that they use pull requests for a lot of things, including reporting and tracking bugs found when testing the change that implemented the pull request. The reason they do so is simple: The context in which that bug was found is that pull request, therefore these two should be kept close together. They implemented this by having a discussion for each of their pull requests. To me this makes a lot of sense for a development team.

After that I attended Chris George’s talk “Easing the Pain of Legacy Tests” (Be sure to watch the slides, they’re great!). He explained how his team started with a long running (as in: 16 hours) test suite that reported about 20% of the tests as failed; and not always the same 20%. After some iterations of working on the problems they had significantly faster as well as much more stable tests. So, for his team it was well worth the effort.

In the afternoon, I attended Selena Delesie‘s workshop “The Best Agile Managers Thrive When Teams Do”. An introductory exercise showed how stressful it can be for both the manager and the team, if the manager tries to control the progress, instead of allowing the team to solve the problem at hand.

Often it’s better to make the goal visible to (and understood by) everyone, and then let the team work out the solution. One thing I found particularly interesting was this: In a more controlled environment people sometimes have to wait (or at least feel they have to wait) for the next task given to them by the manager. This waiting is not always necessary, but happens anyway. In a more team oriented environment the waiting is more often caused by the work itself, for example when one can only continue testing after some serious bug is fixed. To me this ‘work constrain’ related waiting is a lot easier, because one understands the reason for waiting. The ‘management constrain’ related waiting often seems to be unnecessary and therefore can be more annoying.

At the end of the workshop we, the participants, were asked to answer the question: “What does senior management value?”. For the answers, see the photo below. 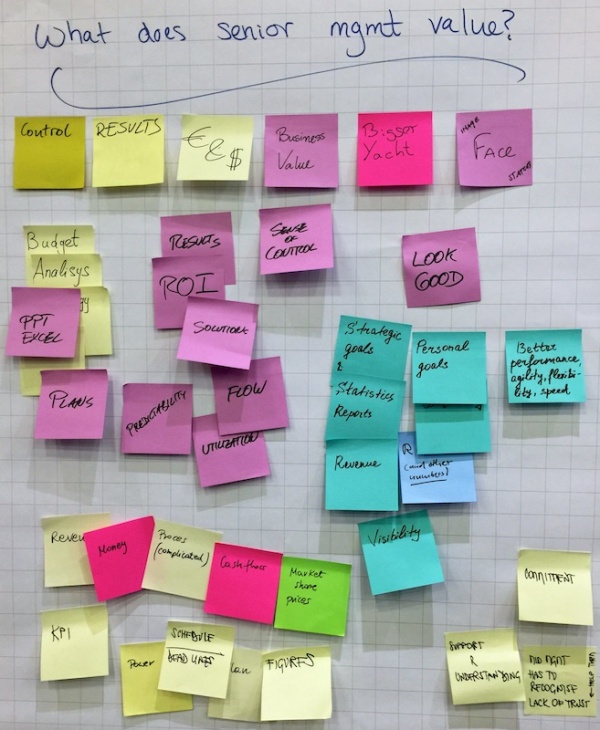 I believe that our (the workshop participants) overall model of senior management is far too simple (or simplistic).

The last keynote was Alan “The Evil Tester” Richardson’s “Helping Testers Add Value to Agile Projects“. His story was full of insights and entertaining and I like how he explained that he doesn’t want to be called a ‘QA’:

As a final note: I had a lot of fun talking to some of the other contributors to Lisa & Janet’s new book “More Agile Testing“. I wholeheartedly recommend this book — but may be I’m biased, since I’m a contributor. 😉 As I had the book with me, I got some signatures, not only from Janet & Lisa, but also from other contributors I met at the conference.

Thank you everyone at the conference! I’m already looking forward to seeing you again next year.