Monday, 10 November in Potsdam Germany saw a day of tutorials and the first ever Software Testing World Cup Finals! 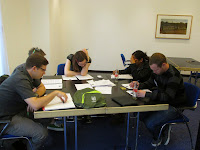 Matt Heusser asked me to assist him with his Lean Software Testing tutorial – which he was offering as a 1/2 day format for the first time (drinking from a fire hose ain’t in it.)  So, we had a small group – which probably made it possible to get through the material we had lined up – more than a handful an it would have been impossible. 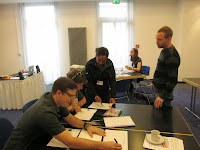 So, we ran a series of exercises and retrospectives.  We threw people in with little guidance – and they came away impressing me – I suspect Matt was equally impressed (you’d need to ask him!)  After 3 1/2 extremely intense hours, lunch break came.

I ended up grabbing an ironing board, ironing ALL my shirts, slacks, etc, (as I could not on Sunday, the day I arrived) then got downstairs to “moderate” the Software Testing World Cup (STWC) finals contest by the designated 2:00 PM time.  The contest started later than that, but an hour of prep, level checks and the like made it go very, very quickly.

I had the chance, with my “broadcasting partner” Kira, to meet all the teams and chat with them briefly.  My intention was to wish them luck and generally be supportive – and give us an idea of the make up of the teams before we began the contest.

In short, we did a live stream of the contest with Kira and I doing commentary.  (One friend said it was a bit like listening to someone calling a football match with no actual football being played on the screen!)  It was a lot of work – and a lot of fun.  We had an excellent time.

I’m not quite sure how to sum up the afternoon and evening.  When the dust settled – I tried to talk with each team for a few minutes – with the cameras off.  They all did extremely well in a fairly stressful situation and showed they were capable of far more than the 3 hours allotted for testing the software under test and reporting the results of those tests.

I was impressed by the teams’ behavior – and extremely impressed  by how the teams all mingled after the contest ended.  Loads of talking and laughing and having a drink together – Friendly competition at its best.

The winners of the African contest, OpenBox from South Africa, brought around bracelets for each of their competitors – one for each team member.  Others shared props and toys and all shared a laugh.

I’ve been told the livestream was recorded, I really hope it was.  I’ve gotten several tweets to the effect of “That was a brilliant answer!”  Except I have no idea what most of the questions were and not certain what I said – for the most part.