A friend, talking about running a project, said to me last week “it’s like the partially-sighted leading the blind”.

Ian Jack, talking about his dad, wrote in the Guardian at the weekend: “[As a child] I had no idea how new this was … I imagined he had always known how to do these things … of course he had to teach himself, listening to the helpful hints of [others] and reading books”

Yep, implementation in an environment where tasks are not simply rote reproductions is often like this, exploratory. You’ll feel your way, based on what advice, experiment, evidence, research, intuition and experience you have. If you’re sensible, and able, you’ll set up feedback systems to help you know when you’re going off track (and hopefully you’ll know what on-track looks like).

When leading others through it too, I find that I want to be up front about the extent to which I feel like I know what I’m doing and be prepared to outline the alternatives I’ve rejected and why, and what kinds of success criteria and warning signs I’m looking for.

Away from the office I’ve just built some monkey bars out of tubes and joints from The Metal Store (great service there, by the way). It’s a one-off. There’s no prototype. I’ve never built anything like this before. I designed it on paper to fit the space I have and the desires of my kids at a price that works for us. My wife and kids were willing helpers for short periods of time and they just wanted to be told what to do at each step, and when it’d be finished.

I took on the initial research project – what is commercially available to fit the constraints I have? What alternatives can I find or think of? Who can I ask for advice? Struggling to find anything that suited our needs, I wondered whether I could do something with scaffolding. I spoke to a local scaffolding firm who couldn’t help me, but suggested the materials I eventually used.

I took the final decision on the design – based on other monkey bars we’d seen and measured and what we thought might work, and on advice from the people who quoted us for materials about the relative strengths, capacities and so on for the parts and the design. I rejected some of the advice I received on various grounds, including aesthetics.

I took the decision on the order to do things, on how and where to put it together, to make it easiest to get together and into the holes, given how heavy it is and that I’d be doing most of it by myself. 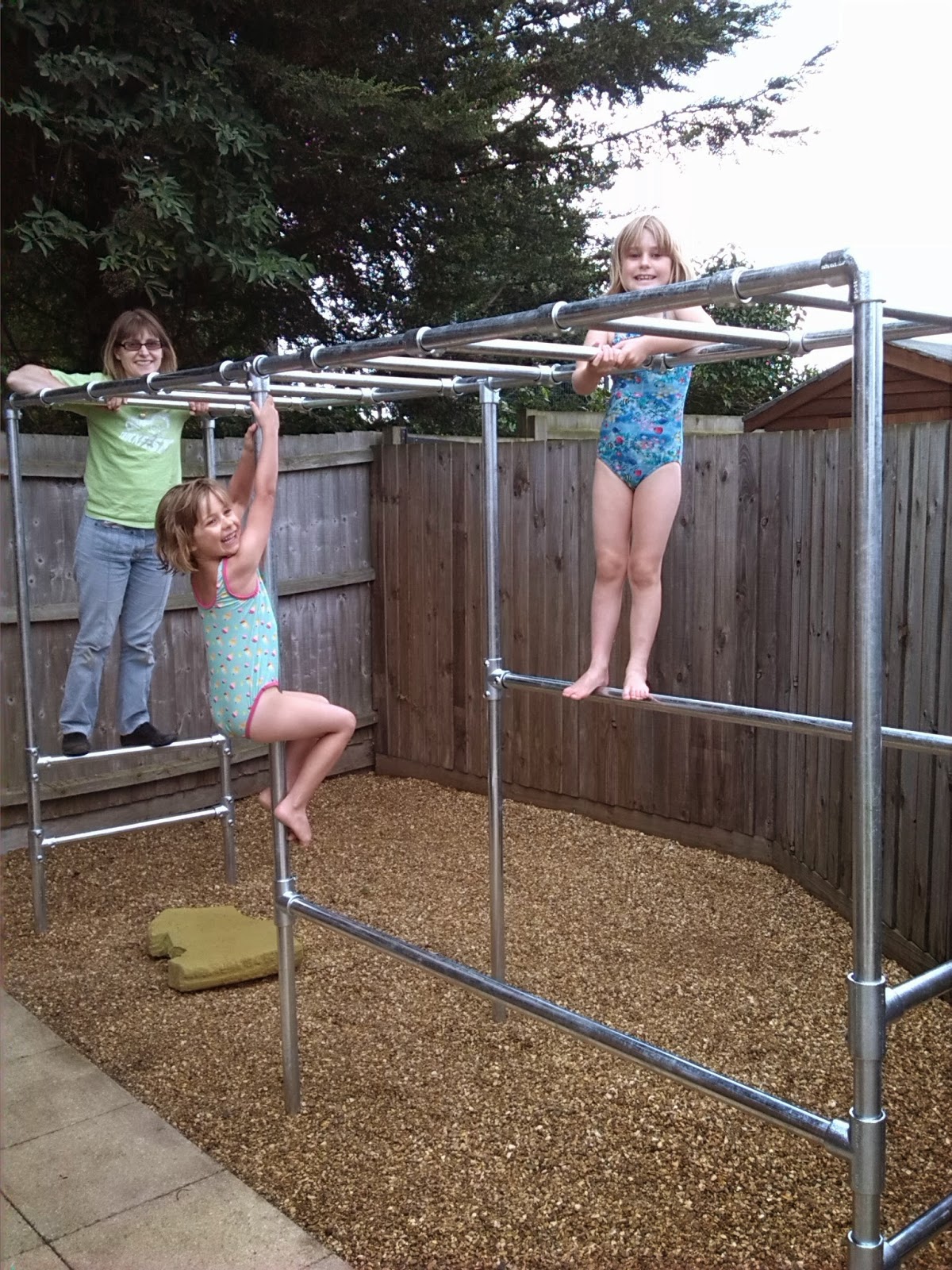 I took the decision on how deep to dig the holes and how much concrete to put into them – based on what I’d read about installing fence posts. And when we’d dug the holes and put the frame in it, I left it standing there for a while so that I could visualise it in use. Then I took the decision to dig a bit deeper because it didn’t look or feel in proportion and because in my thought experiments the poles were effectively massive levers that pulled themselves out of the ground when the kids hung or swung on the frame.

I took the decision on where and how to fix a swing – eventually drilling through the frame rather than attaching to it. I also fabricated some rubber seals out of an old inner tube to keep rainwater out of the holes. Who knows whether that will work or was even necessary?

I took what action I could to give myself confidence that things were right before irrevocable steps were taken. I measured everything before I started. I offered up the parts up against the ground and the holes. I asked my kids to climb on the individual bits as I put them together. I chose materials that give me some reconfigurability options.

And, while I’m happy I’ve done the best I can in those areas given that it was all new, I think the most important thing that I took was this: responsibility.

It was my idea, my plan, they were my decisions, my checks, my measurements, my estimates. If there was a question, it was to me, and I answered it. If it’s not square or not level or if it falls over after some violent swinging or because 10 children jumped on it at once, that’s on me. If the kids get bored of it or the dimensions don’t suit them or it rusts in a year, that’s on me too. If anything at all goes wrong, or needs changing, that’s on me and I’ll need to fix it.