My Fear of Public Speaking

It makes me nervous and usually when I think of public speaking, a line from Eminem’s song Lose Yourself comes to mind:

His palms are sweaty, knees weak, arms are heavy

Sweaty palms?
Check. I’m rubbing down the sweat on my jeans.
Weak knees?
Check. I’m widening my stance slightly so I don’t topple over.
Heavy arms?
Nope. But 2 out of 3 should prove my point. 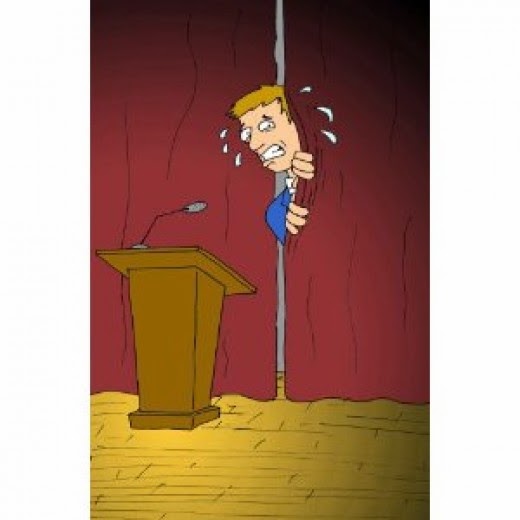 Given the fact it’s one of the most common phobias out there, I’m sure there are many reasons why people would rather do anything but speak in public.

I’m not going to try and speculate. I will, however, write about

Why it scares me and what I’m learning:

Public Speaking is a great way to “put yourself out there”. It’s a very effective way of making you feel so exposed and at the same time you are imagining all of the things wrong with your speech.

This particularly applies when you are giving a presentation by yourself.

I’ve been a member of Toastmasters for roughly a year in total and I have to admit, practice makes it easier. Delivering more speeches means I’m more confident in the next one, because I think to myself: I’ve done x amount of speeches before, one more can’t hurt.

But my nerves still sometimes get the better of me. My palms get sweaty before a speech and I dread having to shake hands with the Toastmaster (MC of the evening) before my speech.
In addition, my stomach is in knots and it feels like its trying to eat itself. This feeling is at its peak about 5 minutes before I begin my speech.

Chances are, you speak faster than you think, when you are speaking in front of people. I’ve seen many other people do this and this is something I’m currently working on. I’ve heard something along these lines often: “X was talking at a million miles an hour, I don’t even know what he was talking about”

I’d almost liken this to your perception of the depth of your own voice. I bet it sounds lower in your head, until you hear a voice-mail that you left a friend. Then you sound a bit more like Bernadette from Big Bang Theory than you think.

Why should the audience listen to you?

It’s important to keep the audience in mind when writing your speech or when you are taking charge of a work meeting.
Don’t waste their time and don’t waste yours.
What are is the audience looking for? What can you give them?