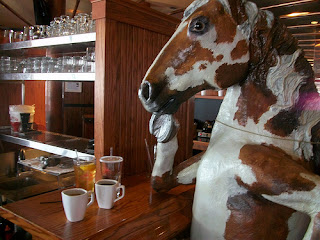 I soon decided, when asked to contribute the first A day in the life… column for our new internal company newsletter, that my daily grind in words wasn’t very interesting. So I wrote this instead, based heavily on Iain McCowatt’s excellent blog post (which is part of my team’s recommended reading) Spec Checking and Bug Blindness used here with his kind permission.
One day
So this horse walked into a pub. “Why the long face?” asked the chap behind the bar. The horse died a little inside and then said “I’ve been testing software all day.”
“Testing?” the barman chortled, “isn’t that just making sure the thing does what it’s supposed to?”
The horse bridled at that and trotted away to an empty table where it picked up a pile of beer mats. Back at the bar it arranged three of them into a trefoil, each mat overlapping both of the others. It looked the barman in the eye.
“You can think of it this way,” it started. “There’s the things we need to do” and it jabbed a fetlock at the first mat, “the things we specified we would do,” a point at the second, “and what we implemented,” and a final poke at the third mat.
“Hmm … drink?”
“Wine?”
“Red or white?”
“Got any Eck?”
“Eck wine?”
Silence for a moment. The horse raised its eyebrows slightly. The barman pulled a long face and the horse turned back to the mats.
“So the bit where all three overlap, that’s where you might imagine the tester does his or her work: we needed it, we planned to do it, we built it, now just check it before we ship it.” 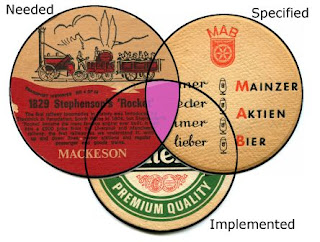 It glanced up, “I’ll have rum. A treble”. The barman wasn’t falling for that one… again. He reached under the counter for a glass but saw the horsing shaking its head slowly back and forth so he grudgingly picked a gold cup from a shelf near the optics.
There was no-one else in the place, so the barman put the drink down without moving away. It looked like he was saddled with the horse for the time being. Mistaking stationary for still interested, the horse continued. “Checking that the software does what the spec says could confirm some of that stuff but otherwise it’d find mostly things that we’d said we wanted but hadn’t done or had done but done wrong.” 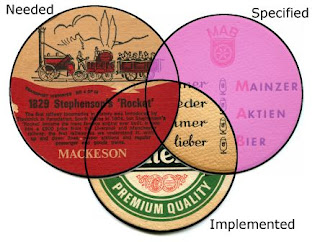 “Hmm” the barman said, wondering whether he could check his Facebook without the horse noticing.
“What about finding things that we needed to do but didn’t do? We can’t find all of those by checking items off the spec and you can bet that there’ll be some” and it waved its cup towards the first mat. “And some of them we mightn’t even knowwe needed to do.” 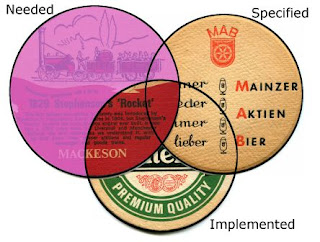 “Hmmnmmnn?” the barman said distractedly, deciding that probably he couldn’t.
But the horse had got the bit between its teeth now, “and then there’s the things that we’ve implemented that we didn’t ask for.” The third mat. “Sometimes that’s good – we might end up with a bit of extra useful functionality. But we might also have done some stuff we didn’t want to do, like changing existing behaviour somewhere else in the product, and we’ve only got a limited amount of time to look for it, so how should we go about it?” 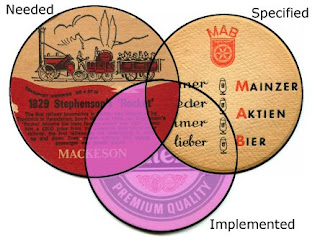 It stared at the barman who was having a mare. Still no other punters.
“And then we might have implemented stuff that wasn’t needed. It might be in the spec – or not – but it turns out that it’s the wrong thing to do anyway. Perhaps customers don’t want that. Perhaps it interacts badly with something else, perhaps … ” and it stopped and dropped its head as it gestured in the general direction of the third mat again, a tear in its eye ” … where’s the manual for finding that, eh?” 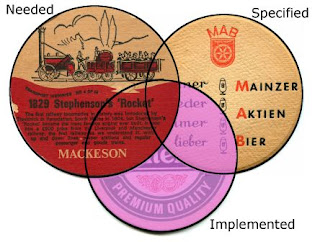 “Time for you to get on your way, I think” said the barman, walking round to the horse and (infeasibly, but no more so than a horse holding a cup and drinking rum) putting his arm round its shoulders to give it a hand.
“And as for stable builds …” but from long experience the barman knew it ill behooved him to let the horse get on to that so he ushered it towards the door and turfed it out.
“‘Night.”
“‘Neiggghhht.”
The following day
So this horse walked into a pub. “Why the long face?” asked the chap behind the bar.
Silence for a moment. The barman raised his eyebrows slightly. The horse raised its eyebrows slightly.
“The Dev manager won the caption competitionagain.”
Image: http://flic.kr/p/9dHgZ9