So an activity I like to do in my free-time is play games on the computer. Truth be told, I do go through phases where sometimes I stay up ’til 2am, then later I won’t play a single game for 3 months.

But yes, I do enjoy it – and I recognise it as a fabulous form of escapism.

Now, I just finished playing Bioshock Infinite. This was followed by about an hour of Google Searching what the hell the ending meant. I had to read the plot on Bioshock’s wiki at least twice for anything to properly sink in. 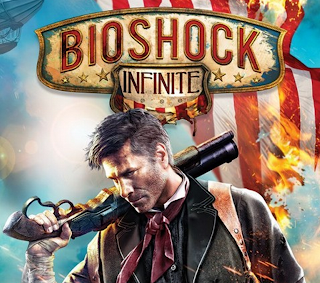 Anywho. I did notice a few interesting things while I played the game.

You see, before I became a Test Analyst, when I stumbled across something ‘strange’ I thought nothing of it – actually sometimes I thought it was downright funny.

Actually, on that note, one of my favourite ‘bugs’ on Skyrim was killing a villain then having them float in mid-air afterwards for no apparent reason. Sometimes they would spin too and go through solid objects. Almost makes you wonder if they left that part in for sheer entertainment value.

When I was playing Bioshock Infinite, I found myself making a mental note of the strange happenings that would occur.

Maybe what I was observing was intentional? Maybe it was a bug? But let me tell you about one of the key things that would happen that didn’t exactly float my boat.

Ok, so there’s a button (‘N’) that you press that tells you with a grey arrow where to go. It’s quite like the clairovoyance spell in Skyrim which you can use to direct you to a hand-picked destination. Damn I love those cool tricks!

So as you run around, you can keep on pressing this button so you don’t waste your time getting lost. This arrow was accompanied by a mission statement that appeared on the top of the screen. e.g. Rescue Elizabeth, Find Elizabeth (she needed a lot of attention in that game, special girl).

Now, what really frustrated me was when this arrow failed to appear upon pressing ‘N’. This happened despite the fact the mission statement still appeared in the top of the screen.

What do you think? For those of you familiar with this game, do you think I was right to assume that the mission statement and the grey arrow went hand in hand?