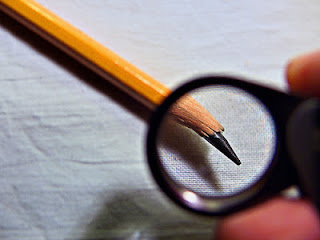 You can learn a lot from your kids, and not just how much you hate High School Musical 1, 2 and friggin’ 3. I play a game with my daughters (Hazel aged 5, Emma aged 3) that we call Follow the Leader, dreamed up one rainy afternoon. It’s like the traditional game except that you play it on paper: one person draws something and the others have to copy along.

When the pictures are finished we line them up and see how they compare. Here’s three of our efforts from one recent game. In order below, Emma was the leader, Hazel sat next to her and I was on the other side of the table (click to enlarge the images):

Emma likes to work bottom-up, incrementally building the big picture and often jumping from detail to detail without giving much, if any, indication of how they interconnect and which are the most significant. This is fine for her – she’s a late-binding kind of leader – but it makes it harder for the followers to be sure they’re building up the right kind of groundwork.

Initial distance between different areas of the image makes them harder to align correctly, and late correction of gross differences is generally not possible in this game. When Hazel leads she tends to prefer to work top-down and relatively symmetrically, making it much more likely that the followers will produce a reasonably accurate version of her template.

As the game goes on early differences, perhaps quite small when the page is relatively empty, lead to larger and larger differences. As and when the leader changes their mind on how the, shall we say, specification should look, any alterations they make to it are by definition correct and straightforward for them to apply. Mimicking the change in the followers’ pictures can be much much harder because, despite the change being conceptually identical, the physical constraints are often different.

In the game these pictures are from, Hazel lost interest in Emma’s sketching after a while and started to go her own way. She looked like she was playing but what she produced, although attractive and creative in its own right, is not a good recreation of the desired design.

Emma will often correct small omissions on other people’s sheets and occasionally notice a big mistake too, but for no obvious reason she put much more effort into monitoring my drawing in this game than Hazel’s and so made no attempt to stop her sister’s, I don’t know, implementation from diverging radically.

While she’s leading, Emma will frequently say she’s doing one thing and then do something else. Mostly this seems to be due to her inability to execute the stated idea rather than any kind of intent to mislead. It leaves the followers unsure whether to take the verbal instruction or that from the hard copy. The same is true in reverse and sometimes she’ll be upset that, although some element of a follower’s picture resembles hers reasonably well, it doesn’t fit with the idea of what her picture should look like that’s in her head.

The different skill levels of the participants in different areas makes a big difference too. I like to think I’m better at drawing than my daughters are – for now at least – so I’m probably best at reproducing what they’ve put down. But they’re unconstrained by convention and so have much greater proclivity for doing something I’d probably never do, like cover a whole page in scribble.

I’m more likely to create a picture that’s quite representational as a kind of gently pedagogical exercise. This exposes skill level differences too. Where the original is recognisable as a thing, it’s much more obvious to all concerned that the reproductions are further away from the thing than if followers are working from something abstract.

When sitting on the other side of the table from the leader, the followers have a physically opposed view what’s going on. There’s an additional load on them in trying to put themselves in the place of the leader, to try to understand how they’re seeing it. But that takes more effort and frequently the follower will draw what they think looks best from their own standpoint instead. Typically the leader doesn’t think to hold their version up the right way for everyone to see from time to time.

Common outcomes of this game include:

And some observations on the degree to which reproductions are faithful to the original design:

Yes, you can learn a lot from your kids – about drawing, obviously.
Image: http://flic.kr/p/9aKzSG