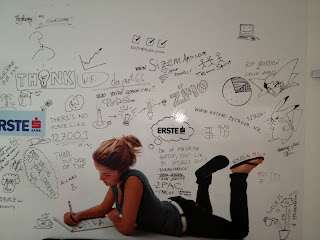 Yesterday was great day for Zagreb STC meetup. It was our annual 10th meetup and we properly celebrated our anniversary by having Gojko Adzic as our guest. He was kind to spend his afternoon with Zeljko and me, and he gave an unexpected valuable presentation about Impact mapping in front the ZIP.factory startup developers and Zagreb STC testers. Gojko, we are very grateful for that!
I was bombarded whole day with valuable information about software development and testing, because Gojko is currently one of the top consultants from that field (although his modesty will not allow him to admit that fact)
Gojko graduated in mathematics and he taught himself how to program because he was crazy about computers. This is great combination, because Gojko is proof that computer is very powerful creative weapon in mathematician hands.
We found out that currently Stockholm is one of the hottest startup European center. Estonia is country that based its economic growth on IT industry (hello anybody here from Croatian government), and result of their trial and error is Skype!
Zeljko talked about his great experience from browser automation and how he is trying to finish writing his Watir book.
Gojko’s advice was: do it! Because having your own book in resume is the best business s card that you can have.
We discussed a little bit about page objects pattern, and Gojko said that context is what matters and page object is not always the best solution. For example when you have complex domain workflows, one little change in workflow will break a lot of automated test written in page object pattern. Components + workflows pattern is better approach in those situations. I managed to bookmark several books mentioned by Gojko in our conversation: Good to Great, Domain-Driven Design: Tackling Complexity in the Heart of Software. Jeff Patton was also mentioned.
Then presentation started about Impact mapping. It was all about valuable information how to test if startup is building the right thing. Pretotyping from Google was mentioned as valuable resource from that field. Several very interesting real world examples from software development were mentioned. My favourite: when one tester was introduced in the team of successful software developers that were great in testing their code, more bugs become to creep to the production. Reason? Software developers stopped to do testing!
That was only a tiny bit what was going on yesterday in ZIP.factory. I noticed one guy from ZIP.Factory that asked Gojko some very clever questions, and I think that he is on right path. This is what matters, and I hope that he is building Croatian Skype.
I would like to thank people from ZIP for their great hospitality, and hopefully we will meet again at Zagreb STC #11.
P.S. Modest as he is, Gojko mentioned just at the end of our interesting afternoon that he is building his own startup.
Check it out here: Mindmup