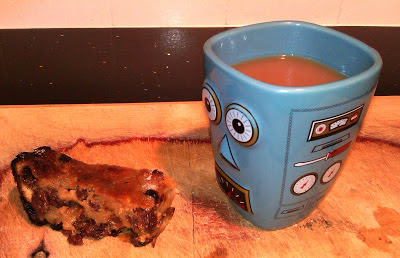 This is my gran’s recipe for bread pudding. I wrote it down on a piece of green continuous printer paper  (back when that stuff was common) and I’ve made it countless times in the years since, as the greasy fingerprints, tea cup rings and splashes of dried pudding attest. It’s lovely with a cuppa, robot mug optional.

Instructions
Soak the bread in the cold tea for a couple of hours.
Squeeze out the excess tea.
Mix all the ingredients well.
Pour into a greased pie dish.
Bake for 1-1.5 hrs at 180 C.

I made it at the weekend with my 5-year-old daughter. As usual it wasn’t quite the same as all the other bread puddings, but it was still clearly a bread pudding in both form and taste and, if the recipe is a user story or a spec, our implementation of it passed UAT with flying colours.

But we didn’t really follow the “spec” very precisely because, well, it’s actually an underspec, there are some things we always do differently but have never bothered to change in the recipe, we had different ingredients to hand this time, our equipment varied from my gran’s..

I’ve accepted it intuitively in practice but never thought of it explicitly before that I can recall: there is usually a space of possible successful outcomes of an implementation, not a point. The skills of a context-driven taster include understanding how the local kitchen vernacular will influence the flavour and texture of the outcome and deciding which aspects of puddingness are important, which non-pudding aspects can be accepted and when something stops being a pudding and starts being a cake, or a pie, or bread or just a mess.