Working on the Moon 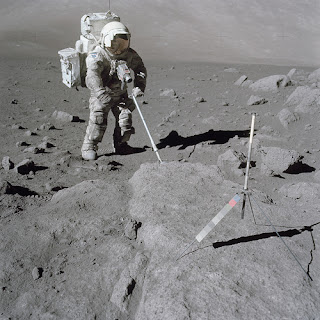 Ever feel like you’re being asked for the moon on a stick? Harrison Schmitt pretty much was. The geologist for the Apollo 17 moon landing in December 1972 was interviewed recently for the BBC World Service on the 40th anniversary of the mission. I loved the interview, and I particularly enjoyed the parallels between working on the moon and testing on Earth. Although obviously the moon has less gravity and no oxygen. And it’s much further to the vending machine from there. Here’s a couple of extracts.

On the perennial square-circling problem:

You never have enough time … The pressure I felt as a professional field geologist on the moon was that of getting as much good information as I possibly could knowing that almost certainly, at least in the foreseeable future, I would not get to go back to that field area … On the other hand there was a professional joy of moving to each new station and having the challenge of deciding what was the most productive thing one could do at that station, what were the best samples to take and to do it in the most efficient way possible.

And on testing versus checking, I mean, on manned versus robotic missions:

The thing that humans bring to the table, whether they’re working on the moon or working in the laboratory is the brain. The human brain is a magnificent qualitative supercomputer that can be trained, assimilate experience and reprogram itself almost instantaneously based on that experience and that training. Robots can’t do that.

The Mars exploration rovers can do a wonderful job but it takes a much, much longer time to gather that kind of insight that a human gets almost instantaneously. A human also can understand almost instantaneously what’s going to be important and what isn’t … You would make a serious mistake if you took human beings out of the exploration equation.