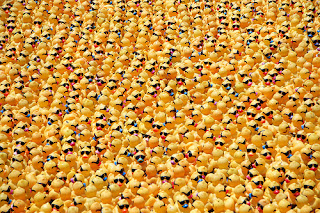 Me and my mate Dave were sitting on the river bank down by the Mill one dinner time, years ago, when we were doing our PhDs at the Computer Lab. We’ve both ended up in software – he’s a developer and I’m in test – but back then there were no chips on our shoulders, no Bugzilla to converse through, no wall to chuck builds over and no barely concealed distaste in each other’s presence.

No, in those sunny days we were just young bucks flexing our intellects in the finest Cambridge tradition, speculating about the meaning of life, fencing with fine verbal sabres on the origin of the universe, nature versus nurture, the merits of a range of economic models and whether we could tempt a duck over the weir using the crusts off our sandwiches.
We spent the best part of an hour, and our cheese and pickle, getting the thing progressively closer to the edge until finally it reached too far forwards after a crumb and slipped onto the lip. Victory!  And then immediately launched itself into the air using its, erm, wings. Defeat!
The message here? Yes, have test ideas. Yes, experiment to confirm or deny them. Yes, stay focussed while you do it. But? But beware of being seduced by the concept, of missing the bleedin’ obvious. You haven’t got time to waste.
Image: http://flic.kr/p/6HZSt9