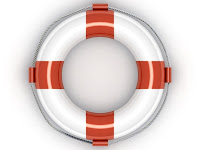 As the tickets pour in and your will to live seeps out you need something to cling on to, something to keep you afloat, a software development life raft, if you will (with patches, natch).

Unfortunately, this is not it.

Instead, this is a bunch of those drug, chug, smug and shrug report definitions you’ve seen all over the place that the Dev manager and me have come up with in triage meetings over the years. We tried using them as buoyancy aids but, frankly, it takes more than Archimedes to lift this mood.

debug report: A note from the developer to his future self as insurance: “Well, I did submit a report about that issue back when I committed the code”. Yes, instead of fixing it.

doodlebug report: Everyone knows it’s coming and hopes it doesn’t land on them.

Doug report: The premise is fair, all the points made are apparently plausible, each step in the logic seems reasonable and internally the report appears to be consistent but you know the conclusion is pure fantasy.

dug report: Not to be confused with the Doug report, this type of ticket reveals a hole somewhere in the product. Sometimes it looks like a shallow grave. Nothing to do with Star Wars but feel free to repurpose it.

earplug report: Yes, we understand that you feel strongly about this one but give it a rest for now, eh?

fug report: Never in the field of software development was so much different misbehaviour reported by so many lines of impenetrable text to so few readers willing or able to even attempt to comprehend it.

hug report: A thinly veiled enhancement request for something your mate in Dev has been angling to do for ages.

humbug report: A ticket deficient in every way. As the kids used to have it, it sucks.

lug report: A large report that you’ve been carrying around from release to release.

mug report: You’ll recognise this one by the way you slap yourself on the forehead when it arrives in your inbox. You forgot to re-read the report before you submitted it; you didn’t check your repro; you didn’t search to find out whether it was a known issue; you didn’t read the manual; you didn’t read the spec; you didn’t talk to the developer on the next desk. You didn’t even get to mark it invalid before the gleeful assignee did.

slug report: Completely valid, with all the necessary explanation and even clear, reliable repro which identifies a problem in an area of the codebase so repellent that none of the developers want to touch it.

snug report: The perfect ticket, no excess flab, no missing details. You get a warm feeling when you read one of these. Unless you’re the assignee.

thug report:  A heavyweight user whales on some (generally non-critical) aspect of the software in a completely over the top fashion.

tug report: This ticket has been hijacked by various parties to try and make it reflect their current issue. Over-enthusiastic reporters might tug their own.

ugh report: Those times when you want to push a dirty nail deep into your eye with disgust at the reporter. Why would they submit that? In that component? Assigned to that developer? At P1, critical? Twice? This week?

With thanks to the Dev Manager and apologies to everyone else, especially those who’ve received or had to verify the bugs of the above types that I’ve submitted myself. Count yourself lucky we didn’t get on to Heisenbugs, Hindenbugs, bugword bingo or buggerangs.
Image: Salvatore Vuono / FreeDigitalPhotos.net