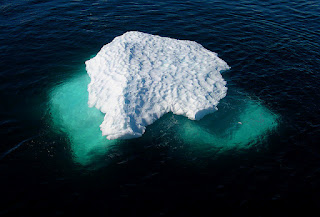 The Dev manager scooted his chair over to my desk yesterday with that particular smile on his face that means he knows something I don’t know.

Dev: Got a question for you. [Grin]

QA: One of those questions with implications? [Grimace]

Dev: I’m sitting on the tip of an iceberg of implications. [Cheshire cat]

This is not a novel phrase  for not a novel idea but it reminds me to keep myself in check when I’m trying to think through whatever the issue turns out to be.

Dev: We need to audit these components against specific criteria for a stakeholder. They’re used everywhere in the product. [Richard Branson]

Hmm. I can see what’s above the water for free; I can get an idea of what’s just below well enough; I could dive deep down but I have to get my gear ready and the currents and the winds and new snowfall will have shifted things by the time I resurface.

When I can’t see the scale of the berg yet and I don’t have time I’ll look for a cheap way to model or approximate it instead, then give a qualified answer. The kinds of things I might consider include

We kick it around for a few minutes and decide to base our response on the documented behaviour of the platform we’re using for those components, with caveats according to the differences we can easily identify. We’ll postpone the need for more investigation until later, or  not at all.

He wheels away. I turn back to what I was doing and let my face unwind into its natural growler position.
Image: http://flic.kr/p/5bq6XE