After a very nice lunch, we are convening with Matt Heusser and “Teaching Testing THrough Exercises”. Matt has prepared an app for us to test, based on palindromes. A palindrome is the same word backward and forwards. The app will tell us of the word being submitted/suggested is a palindrome.

This thread looks at some issues that are visible with the app. One example is that  a phrase with spaces in it will not be considered a palindrome, as they do not read these the same way forward and backwards: 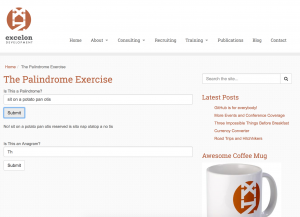 During the course of the session, we discovered a number of bugs and what might be seen as a bug, feature enhancement or just say “that’s how it works”. An example bugs are the fact that the palindrome application requires symmetrical character placement (letters and spaces have to match forward and backward), an example feature would be to provide a clear button so as to not have to highlight the text string and press the delete key.

At the end, we had a chance to see that, through all of our interactions, we were able to see and discuss a lot of issues. There were a lot of details we had to push to the side or consider less important, but on the whole, there’s a lot of skill that can be demonstrated.